Roku has introduced the latest version of its streaming player, the Roku 3, with a new user interface, faster processor and an intriguing new feature. The included wireless remote control provides a headphone socket for private listening. It is a simple innovation that we predict will become more popular. It just shows that there is room for new thinking about the role of the remote control.

The Roku remote control is already innovative, doubling up as a motion-sensing game controller for playing things like Angry Birds, for those so inclined. The headphone socket allows you to listen without disturbing others. The volume buttons control the audio level. It comes with in-ear headphones but you can use your own.

“The private listening mode is perfect for late-night streamers who don’t want to wake up the family,” explained Anthony Wood, the founder and chief executive of Roku.

This is possible because the remote control uses Wi-Fi Direct, rather than the traditional one-way infrared beam. So it can relay the audio to the remote control, eliminating trailing headphone cables or the need for special wireless headphones.

This is ideal for the intended usage of the Roku device, with a recommended retail price of $99.99, which the company says is perfect for the bedroom or the “man cave”. The marketing stereotype is probably correct. This is no doubt a boy’s toy with particular applications, but the feature deserves to be more widely adopted. 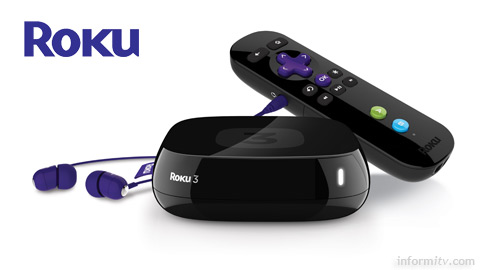 It is the sort of lateral thinking that we might expect to see come from Apple, and indeed the Roku box has been seen by some as a more innovative version of the Apple TV.

There is also a free Roku app for iPhone and Android devices, which allows you to control the box from your mobile phone. Now, the app does not currently support audio streaming, but in principle it could, as might other third party television companion applications.

Indeed, one useful application of the “second screen” could be to provide audio output to enable individual listening, at individual audio levels — ideal for the hard of hearing, or for personal listening without the television sound in the room.

The new Roku 3 has more rounded contours, a faster processor and introduces a new user interface, which will also be rolled out to all current-generation Roku boxes.

Roku products are highly rated and potentially disruptive devices that provide an end run around the efforts of smart television manufacturers and pay-television providers alike. They provide an open platform allowing developers to create their own channels.

It is worth remembering that Anthony Wood, the founder of Roku, originally developed the idea for the box as the streaming player for Netflix when he worked there. He was previously one of the pioneers of the digital video recorder, before his ReplayTV company was acquired by DIRECTV.

In July 2012, Roku received a further $45 million in investment, including strategic stakes from News Corporation and British Sky Broadcasting.

Roku has previously announced an agreement with Time Warner Cable to bring the TWC TV service to its products. This will enable Time Warner Cable subscribers to access their TV Everywhere service on Roku boxes. It will be the first time TWC TV will be available for streaming on a consumer device connected to a television.

With an increasingly strong line-up of apps, including Netflix, Amazon, Crackle and HBO Go, as well as NHL and MLB sports, Roku now claims to come with 750 channels of entertainment.

We have yet to see what Apple will come up with next in this space, or what Intel is planning to offer, but the inexpensive add-on box currently seems like a strong contender to transform the television experience.