Nearly 9.5 million smart televisions with open internet access shipped in the second quarter of 2012, with 43 million expected to ship in the calendar year. This figure is forecast to grow to 95 million a year in 2016.

In Western Europe around 2 million sets with open internet access shipped in the quarter, with a further million offering closed access controlled by the display manufacturer. That compares to a total of around 2.5 million smart televisions shipped in Western Europe during the previous quarter.

In North America there were significantly lower shipments of around 1.6 million smart televisions, about the same as the previous quarter, with an equal split of open and closed systems.

China was the largest market by volume, with the vast majority of over 4 million smart television sets shipped offering open internet access.

The figures are from the latest Quarterly Smart TV Shipment and Forecast Report from NPD DisplaySearch. 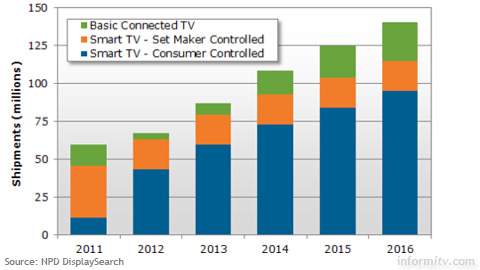 Although North America has the highest levels of online video usage, the market is dominated by subscription services.

Western Europe has more programming freely available and the catch-up services of terrestrial broadcasters are beginning to dominate, with open standards like HbbTV rapidly gaining acceptance and evolving with new features.

The development of the Ginga standard in Brazil is following a similar path, with commercial broadcasters uniting around a common platform. The basis of this is Ginga-NCL, or nested content language, based on XML.

Basic sets that link to HbbTV and Ginga services will enter the market at the lowest price points. DisplaySearch suggests that new open standards such as HTML5 will also help to solve the problem of software updates and obsolescence in smart TVs, which should enable such sets to compete with cheap streaming boxes.

The estimated total number of connected television shipments worldwide in 2012 is around 65 million, in line with projections provided a year previously, with the trend forecast for almost linear growth over the next five years.

Based on the DisplaySearch figures, informitv expects over half a billion connected television sets will ship over five years from 2012 to 2016, with around 350 million offering open internet access.