While television advertising is here to stay, relatively flat growth forecast over the next five years means broadcasters must advance new strategies to provide sustainable growth and avoid losing ground to competitors. That is the view of a research report produced by IHS Screen Digest in association with online video advertising platform provider VideoPlaza. Sorosh Tavakoli, the founder and chief executive of VideoPlaza, discussed the conclusions with William Cooper of informitv.

However, the report suggests that increased pressure on pricing, audience fragmentation across digital media and rising demand for more granular and timely return-on-investment metrics from the demand side is pressing broadcasters to diversify their advertising business model beyond linear television.

With the growth in online advertising, video facilitates the proliferation of brand advertising. The delivery of audio-visual brand narratives is no longer confined to the broadcast environment. The report observes that the industry adage that “TV is the worst form of advertising except all others that have been tried” may still hold true today, but the nature of what constitutes television is changing.

By the end of 2014, IHS Screen Digest expects that in North America and Western Europe there will be more active connected living-room devices, including televisions, set-top boxes and games consoles, than television homes. There are already more connected devices in these markets than there are television households when smartphones and tablets are included. 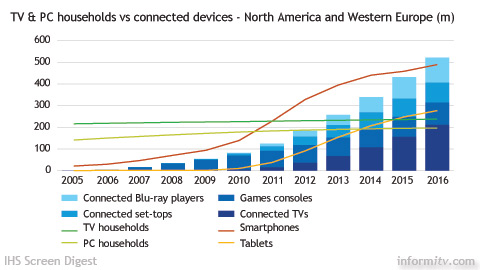 This introduces further complexity and cost for anyone wishing to aggregate audiences across such devices. The world of online video advertising has many more variables than the traditional television broadcast environment, which is limited by historical convention, broadcast economics and regulation.

In order to make the most of the opportunities presented by new connected devices the fragmentation of platforms must be forged into a cohesive ecosystem to deliver reach and scale, which is imperative if this is to become a viable alternative channel for brand advertising.

The implication of this is that broadcasters should delegate the delivery of online video advertising to partners such as VideoPlaza that can offer economies of scale, while they focus on providing programming.

“The final goal is to help our clients sell one audience,” explained Sorosh Tavakoli, the founder and chief executive of VideoPlaza. “Advertising is a business of scale. You want to sell one audience. We’re the first platform in the world where we can sell one campaign across all those devices and allocate it dynamically.”

VideoPlaza has profiled more than 7,000 different connected device configurations. Once an advert is loaded into the VideoPlaza Karbon platform, various versions are created for each of the different devices and displays that will be targeted. When a video player makes a request for an advert it can be profiled by its user agent identifier, so that the appropriate advertising asset can be delivered according to the media context. It means that a campaign can be sold across a range of devices and displays.

Given that a number of online video platforms also aim to deliver video programming across a range of platforms, informitv asked why it was desirable to decouple the advertising.

Sorosh suggested that it was important to maintain a separation between programming and advertising. VideoPlaza integrates with many of the major players in online video. While there would inevitably be fragmentation across different platforms, he said media companies should have a single provider for their advertising inventory.

“Your distribution strategy should be promiscuous when it comes to programming, but be very conservative with the control of the advertising sales,” he said. “You want advertisers only to be able to buy from you.”

“Consumption will gradually shift from a broadcast model to an IP delivered model,” he predicted. “Broadcasters have a fantastic opportunity to build a strong position online.”

Meanwhile VideoPlaza seems to be growing rapidly, although it faces competition from the likes of Google. However, many media companies may be less circumspect about dealing with a technology provider like VideoPlaza. The company operates a software as a service model and charges on the basis of volume rather than a share of revenue, leaving media companies to sell advertising in much the same way as they have always done.

A Future for TV: IP-delivered video advertising in a connected world is a report produced by IHS Screen Digest in association with VideoPlaza.