EchoStar has introduced what it claims is the slimmest digital video recorder in the world. The ultra slim aluminium box houses a twin-tuner digital video recorder with a 500GB hard disk drive. At just 14mm high, it complements the latest flat screen designs, but could we soon see televisions incorporating such storage?

The latest EchoStar box is designed to support Freeview+ HD standards for digital terrestrial television transmission in the United Kingdom. It can record up to 125 hours of high-definition television or 300 hours in standard definition. It can also connect to broadband to deliver connected television features including access to the BBC iPlayer.

With no space for a bulky analogue SCART connector, it requires a television with an HDMI input. Recently on show at the Connected Television Summit in London, it is available for pre-order and will be in the shops from the end of May, priced at around £260. 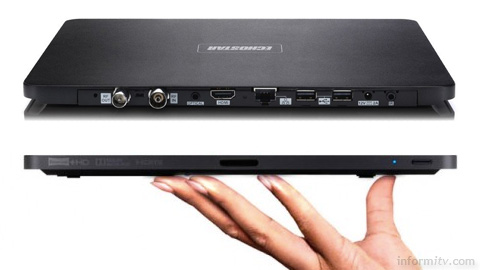 “We pride ourselves on challenging the status quo to create truly inspirational products,” commented Rhod Williams, the general manager of EchoStar Europe. “The Ultra Slim Box represents the coming of age for the DVR and is the perfect complement to the latest range of ultra slim TVs.”

“We are delighted to see innovative companies bringing exciting new products to market on the Freeview platform,” said Ilse Howling, the managing director of Freeview.

With the planned YouView platform yet to see the light of day, there is clearly still plenty of room for innovation in the Freeview retail market.

At just 14mm high, the EchoStar HDT-610R is about the same thickness as a small USB disk drive. Indeed it contains the 2.5″ form factor disk drive typically used in such devices.

Such a low profile could easily be fitted behind or incorporated in a flat screen display. Manufacturers appear to be competing to produce flat screens that are ever flatter and thinner and as yet appear to have largely ignored the opportunity to add storage to their screens, leaving their so-called smart screens with limited long-term memory. This seems strange, since it seems such an obvious addition.

Of course, there are other possible approaches, such as using solid state storage to achieve further miniaturisation, although there may be concerns about cost the number of write cycles that could be supported.

Storage has historically been separated from the television screen, although of course it is integrated in other devices, like laptops, tablets and smart phones.

It may be that storage is better attached to a local area network, as part of a media hub, or ultimately in the network cloud.

In the meantime, the EchoStar product is a refreshing alternative to the traditionally bulky box beneath our ever-flatter screens.

EchoStar Corporation reported first quarter revenues of $765 million to the end of March, a 59% increase on the corresponding period in 2011, with a net income attributable to EchoStar of $127 million, compared with $17 million for the same three months the previous year.