Sigma Designs has brought out a reference design for a revolutionary connected television device that is little larger than a pack of playing cards. It plugs directly into a power socket, receiving high-definition video using internet protocols over mains wiring, and connects to a display through an HDMI connector, with optional SPDIF optical digital audio output. The device also integrates Z-Wave technology for radio frequency remote control, allowing it to be placed out of sight. This can be used to control not only the television but also a range of compatible home automation products, including room lighting.

The Sigma Designs reference kit is designed to allow rapid development of new products and services. It supports Linux and Android and is based on an SMP8670 secure media processor that can display high-definition video and support graphically rich environments such as Adobe Flash. It incorporates HomePlug AV with ClearPath, which uses mains wiring, including the ground connection, to allow high-definition video to be delivered over existing power wiring. Z-Wave support allows remote control and integration with home automation systems, with compatible products from over 170 manufacturers. 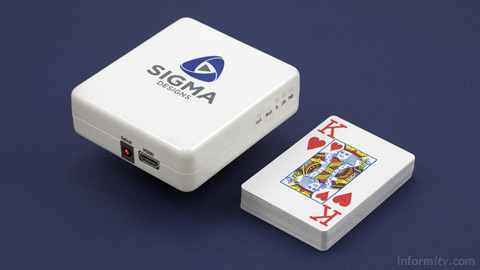 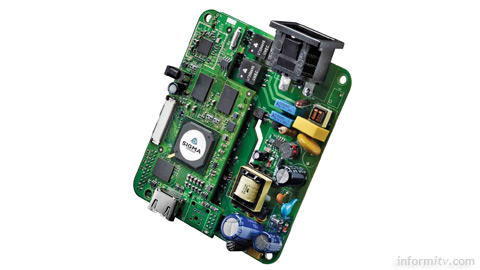 The reference design challenges conventional assumptions about digital television receivers. There are no traditional satellite, cable or terrestrial connections or indeed any other audio video inputs. It is assumed that such signals are acquired elsewhere and that selected streams are delivered over mains wiring within the home.

Such signals could come from a central home gateway device, or from mains plug adapters with digital satellite, cable or terrestrial inputs. This means that displays can be conveniently sited in locations where television signals might otherwise be inaccessible.

A key question with the Sigma Designs reference design is how to support current network connected televisions, which have a wired or wireless internet connection. Ironically, the plug-mounted box does not provide a network port.

HDMI can support an Ethernet Channel, to provide integrated internet protocol connectivity. However, that was introduced with HDMI 1.4, which is not currently supported by the Sigma box, or indeed by many displays.

Incorporating powerline communications technology directly into the screen would only require a mains plug connection, using HomePlug AV, with no need for an HDMI input.

If a product design led company like Apple were to produce a television display, as many have predicted, a characteristically radical design would omit conventional audio video inputs and simply plug into the mains, with any traditional receiver sited elsewhere.

The days of the traditional set-top box, or more likely the digital video recorder sat underneath the television screen, could be numbered, or at least consigned to a cupboard.

The really intriguing aspect of the Sigma Designs concept is the incorporation of Z-Wave radio frequency remote control technology. Z-Wave is a proprietary wireless mesh network protocol for home automation, developed by Zensys and supported by the Z-Wave Alliance of independent manufacturers who license the specification.

Although Sigma Designs officially supports Z-Wave, it has indicated that if required it could equally support ZigBee, a competing wireless mesh networking specification.

Both approaches to home automation provide interesting possibilities when connected to the television environment. Z-Wave allows the status of a device to be read remotely, for instance, the source and volume, and allows other devices to respond appropriately when they change. This offers the promise of a truly universal remote control that can operate throughout the home.

For instance, it would be possible for a single remote control command to set a particular scene that draws the curtains and lowers the lights to watch a movie. At the end of the movie another command could turn off the television, turn off other lights and arm the alarm system for the night.

Such a scenario has hitherto been the province of professionally installed home cinema systems. The idea here is that it could become a plug and play self-install solution.

For service providers, from pay-television operators to telecommunications operators, this offers the prospect of integrating home entertainment and home automation into unified services.

Operators like Verizon are already actively exploring such possibilities, both for its own FiOS customers but eventually for any customer with broadband access.

However, the Apple iOS and Android ecosystems could equally be extended to incorporate such capabilities in retail devices, extending the reach of consumer electronics companies deeper into the digital home.

Interestingly, the opportunities for such innovations, which can offer a compelling consumer proposition, may be entirely independent of broadcasters or pay-television platform operators.

The Sigma Designs solution was just one of a number of technologies presented and discussed at the Connected Home World Summit in London.