Radioplayer is a unique partnership between the BBC and commercial radio in the United Kingdom. It brings their online audio services together in a single player with a consistent look and feel across over a 150 stations, with hundreds more expected to follow. Adopting a pragmatic approach, Radioplayer is for online radio what YouView should be for television and it is likely to have a presence on the latter platform when it launches.

All BBC national and local stations will be available on Radioplayer, together with commercial radio from the Capital and Heart networks of Global Radio, and Smooth Radio and Absolute Radio from Guardian Media Group, shortly to be joined by stations owned by Bauer Media and UTV Media. These are expected to be followed by hundreds of local, regional, student and community radio stations.

The Radioplayer web site will provide a one-stop destination for online radio. It will allow listeners to search by station, programme, location, presenter or topic. Users can store their favourite stations as presets. Some programmes will also be available to listen again on demand or as podcasts. Some stations will only be available for listening within the United Kingdom. 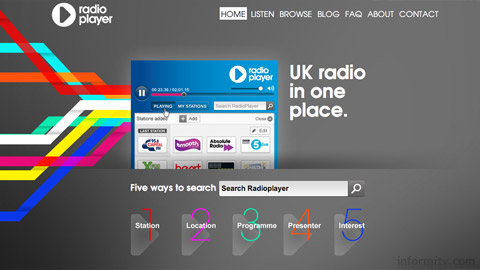 Individual radio stations will have full control of their branding, audio and visual media within a pop out player and commercial stations will be able to add sponsorship and advertising messages.

Online radio addresses a small but growing audience, with just over 3% of all radio listening in the United Kingdom through the internet. The latest RAJAR research figures indicate that some 4.5 million people a week across the country listen to radio via the internet, and the stations included at launch account for a cumulative online reach of nearly 3.5 million individuals.

The Radioplayer is similar in many ways to the BBC iPlayer, and for BBC stations it is co-branded as such. From any Radioplayer instance users can search for other radio programming and add stations to a list of favourites.

“Radioplayer’s strength is a simple, powerful offer to listeners: all of radio in one place,” said Tim Davie, director of audio and music at the BBC. “This partnership is another signal that the radio industry is accelerating cross-industry innovation.” 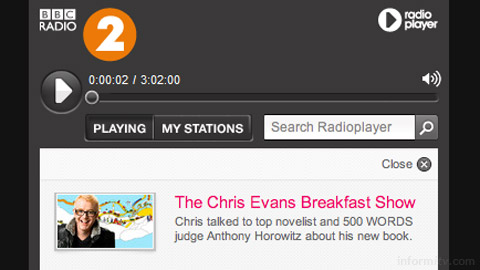 UK Radioplayer Ltd is a not for profit company founded by the BBC, Global Radio, Guardian Media Group, Absolute Radio and RadioCentre. “Radioplayer will benefit the entire UK radio industry — BBC, commercial, and all Ofcom licensed community, hospital and student radio,” said its chairman, Andrew Harrison, the chief executive of RadioCentre. “We’re aiming for the whole of UK radio to be on Radioplayer within a year.”

Michael Hill, the managing director of the joint venture, and its only full-time employee, said “Radioplayer represents a united industry investment in its digital future.” With hundreds of stations and thousands of programmes initially available online, he said that “could soon extend to platforms including mobiles, tablets, connected televisions and hybrid radios.”

Radioplayer has been announced as one of the advisory partners of the YouView television platform, due to launch in early 2012.

Indeed, Radioplayer is an example of how YouView might and should work: simple standards, consistent navigation, aggregated metadata and federated contribution. It demonstrates that it need not take hundreds of people and millions of pounds in investment and marketing to accomplish.

The current web based Radioplayer is a start and has the benefit of being immediately accessible, but the service is screaming for applications that allow it to run automatically, potentially persistently viewable on top of other windows or from the system tray or application dock, and for dedicated clients on smart phones and tablets.

Such applications have existed for years, but they tend to be either limited to particular groups of stations, or present an overwhelming list of international services that are unfamiliar and often do not include the favourite stations of a particular individual.

There is nothing new in the distribution technology, which still depends on unicast streaming, rather than arguably more efficient approaches such as peer network distribution or application layer multicast. That said, this has the virtue of simplicity. More scalable solutions can always follow.

The key feature of Radioplayer is that it aims to include most radio stations in the United Kingdom, in a unique partnership between the BBC and the commercial sector, also including non-profit student and community groups.

Radioplayer will become the default player on the web site of every participating radio station, potentially putting competing stations just a click away. That has always been the reality of radio and collectively all stations stand to gain from the increased ease of use of online listening.

This demonstrates how the aggregation of channels and programmes can benefit the respective providers in an open and competitive environment.