Sky has released an incredibly impressive interactive Sky News application for the Apple iPad. It blends live and breaking news with access to recent stories and supporting graphics, galleries and graphs to provide context and analysis. It has been described as television news for the tablet generation. Sky pioneered interactive television news a decade ago with its multistream application. The Sky News app for the iPad shows what is possible today. It may also provide a pointer to what will be possible in a world of network connected television. This may be the future of interactive television.

The new Sky News app for the Apple iPad presents live and on demand video coverage from the last twenty-four hours in an engaging interactive format. It took a year to develop and is backed by a dedicated editorial team.

John Ryley, head of Sky News, described the launch of Sky News for iPad as one of the most important developments in the history of the channel. “We challenged ourselves by coming up with new ways to deliver news to our users, taking advantage of the unique features and functionality of iPad,” he said. “We wanted to bring users more control and flexibility to how they view and interact with the news they want. The result is Sky News for iPad.” 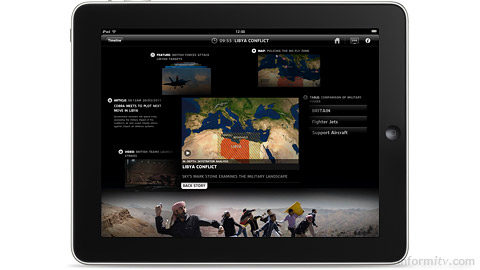 The Sky News app is currently available for free at the Apple iTunes store for users in the United Kingdom. For non-Sky customers it will then move to a paid, monthly subscription, expected to be a few pounds a month. Sky subscribers will continue to be able to use the application for free, bundled as part of their package.

Whether people will sign up as subscribers solely to see over this particular pay wall is missing the point. News Corporation clearly sees value in a bundled offering, and Sky already has ten million homes in the United Kingdom and Ireland subscribing to its news service as part of their package.

The Sky News app is also being promoted in the iPad app for The Times, and will also no doubt be promoted in the Sun and the News of the World, all controlled by News Corporation, which may be a sign of things to come.

The term tabloid was originally coined by a pharmaceutical company as a trade mark for a compressed tablet but was soon applied to a form of journalism that condensed stories into an easily-absorbed form, and then to the page format of the newspapers it typified.

The tablet computer is now being seen an ideal form factor for newspapers and magazines which are reinventing themselves for this electronic medium in the hope of signing up subscribers. What is now emerging is a new form of multimedia presentation that combines aspects of print with audio and video.

Sky News political editor and presenter Adam Boulton described the Sky News app as “the most dramatic single technological advance we have made yet”.

The output of the rolling news channel can be viewed as a timeline, offering access to stories over the last 24 hours.

The top stories view presents a mosaic of the main news of the day, led by the most significant items.

Selecting a story loads it as a window in the centre of the screen, generally surrounded by related items and background information.

Sky News continues to set the pace in television news gathering, particularly when it comes to technological innovation. Its new high-definition news channel, based in a purpose-built multimillion pound news centre, currently leaves the BBC looking low budget by comparison, at least until it moves into its own new complex.

The Sky News app is a product of this investment in innovation. The video quality benefits from the high-definition output and the segmentation reflects the editorial systems used to product the rolling news channel.

The BBC technology corresponded Rory Cellan-Jones conceded in a piece on the BBC web site that the News Corporation empire “has made all the running in terms of digital innovation over the last year.” He said: “The application goes further than anything I’ve seen so far in delivering a television news service crafted for a tablet computer,” adding that “and it should encourage other news organisations to up their game in this area.”

CNN also has a new iPad app that also features a scrolling wall of video frames to access clips, but lacks the 24-hour timeline view. The BBC News app is largely text based, illustrated by video. Both have more in common with a web site.

It might be argued that textual presentation provides a more literate form of journalism that encourages analysis and understanding, but while eminently accessible to the average reader, it is nonetheless inaccessible to many.

In comparison, the Sky News app looks more like an extension of the television channel — more mosaic than prosaic. It appears more immediately engaging, particularly given the dramatic nature of many current world events.

That may contribute to the bias against understanding that John Birt famously identified in television news and attempted to address as former director general of the BBC.

However, the interactive approach also reflects the complex texture of developing stories, and the unfinished nature of rolling news coverage, allowing users to explore related items and the back story to current events, which may increase engagement.

It underlines the importance of plurality in news coverage. Sky News is offering an alternative view of the news that may well be more accessible to many and is certainly offering strong competition to other channels.