The GEM or Globally Executable MHP standard is now at the core of a range of Java based standards, including MHP, Blu-Ray, tru2way and the work of the Open IPTV Forum. The DVB project has now “re-factored” the GEM and MHP specifications so that MHP references GEM rather than the other way around. GEM has the potential to become a key to interactivity across multiple platforms. There are now 33 million deployments of GEM worldwide.

The GEM and MHP standards have been revised in two new “Blue Books” and the intention is that they will form the basis of new ETSI Technical Specifications.

MHP or the Multimedia Home Platform was originally developed as an open middleware specification by the European DVB project to support conventional transmission standards. It received limited adoption.

The core GEM or Globally Executable MHP specification formed the basis for the CableLabs OCAP or Open Cable Applications Platform, now known as tru2way. It is also part of the specification for interactivity on Blu-Ray discs and has been adopted within the Open IPTV Forum standards. Consequently, GEM is now core to a variety of interactive platforms.

Now the GEM and MHP specifications have been redefined, so that MHP is seen an implementation of GEM. 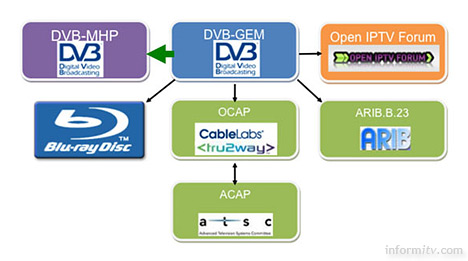 The repositioning of MHP with respect to GEM leaves the latter as a credible core for open standards including future hybrid broadcast and broadband networks that combine DVB standards for satellite, terrestrial or cable television transmission with internet protocol transports.