Joost has relaunched with a web-based service using Adobe Flash in an attempt to boost usage. As well as dropping the downloadable client application, the company has apparently abandoned plans to use a plug-in to support its peer network distribution system. So now it is little different to many other online video sites, but it still requires users to log in. By default it will also tell everyone else what individuals are watching.

As recently as a month ago, as reported by informitv, Joost was testing its site with a proprietary plugin that users had to download. For the moment, at least, Joost seems to have abandoned its peering approach, although it is possible that could be supported within Flash in the future.

“We have experimented with different methods of delivery, listened to your feedback,” said Joost chief executive Mike Volpi in a message on their web site. “We have moved to a Flash player,” he said. “We are now download-free.”

The adoption of Adobe Flash confirms the dominancy of this format for online video. The material is well encoded and displayed in 16:9 widescreen at 640×360 resolution, which can also be acceptably viewed full screen.

Joost has re-emerged as a web-based social site. The main difference between Joost and YouTube is that the former is based on material licensed from a range of distributors, rather than user-contributed clips. 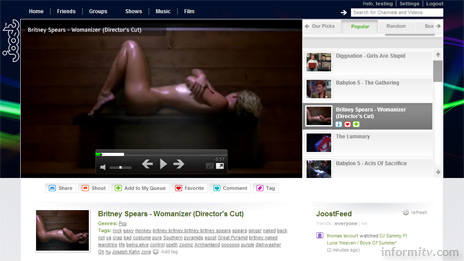 Joost now boasts 46,000 professionally-produced videos, adding up to over 8,000 hours, although the offering varies by region for rights reasons. Programming is organised into three main categories: shows, music and film. These are then classified by genre.

There is a range of programming, from short-form to full-length feature films. The presentation is rather random. It seems that Joost is relying on search, discovery and the recommendations of other users to organise the incoherent mass of material. This may well be the modern way on the web.

“People have always relied on their friends’ recommendations to figure out which movies they want to watch, or talked about their favourite TV shows and moments with friends and colleagues — and now Joost has combined those real-life experiences in one online destination,” said chief executive Mike Volpi.

There is much more emphasis on social features, including integration with Facebook. By default, a users viewing behaviour is shared with others, including friends and members of groups, although potentially on the home page of the site. This may be acceptable for the cool kids, but some may see this as an extraordinary invasion of privacy. The option to opt out and turn this feature off is hidden in the privacy tab of the account settings.

Joost has reinvented itself as a browsing experience in a bid for social acceptability. That does not disguise the paucity of the programming and eclectic mix of material. This remains a key limitation. There is some reasonable programming there, but it feels rather like rummaging around in the hope of finding a bargain.

As major media companies like NBC and the BBC push forward with promoting their own programming online, Joost no longer feels like the breakthrough that it should have been.

“There is a risk that Joost has lost its window,” observes Business Week, quoting one William Cooper of informitv. “They are doing exactly the right thing,” he says. “The real question is whether it is too little, too late.”