Microsoft has shown a new interactive television application developed for the Microsoft Mediaroom platform by Emuse Technologies in co-operation with the BBC. Building on the success of red button interactive television, the BBC iPlayer and the BBC web site, it offers access to web style material through an intuitive interface. Microsoft also announced support for H.264 in Silverlight and a secure architecture for television tuners in personal computers.

Microsoft showed informitv the concept demonstration of the BBC service. It suggests how news, sport and weather information could be presented using the Microsoft Mediaroom platform, as deployed in he United Kingdom by BT Vision. The result is more like a modern web experience than a traditional interactive television service, using the broadband connection to good effect. 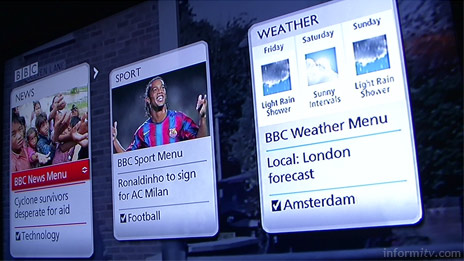 “These applications set the benchmark for a new generation of interactive TV,” said Stephen Petheram, of Microsoft Mediaroom. “They show the potential of connected TV powered by Microsoft Mediaroom to deliver consumer experiences that seamlessly blend real-time content and services from the Internet and private data sources with broadcast TV.”

The application is based on the new Microsoft Mediaroom Presentation Framework, which is in turn based on .net technology. Microsoft released trial software to customers and developers in May. The full release is expected to be deployed on customer networks this year, with the first live applications expected in 2009.

Customers include AT&T, Deutsche Telekom and BT. They currently only have around 1.5 million subscriber homes between them, but Microsoft says the number is growing rapidly. Having previously focused on top tier telcos, Microsoft is now also turning its attention to smaller operators, with a migration programme aimed at those that have already adopted other platforms.

“As the IPTV market matures, we’re seeing interest from operators on first-generation platforms and homegrown solutions to migrate to Microsoft Mediaroom,” said Ben Huang, director of product management for Microsoft Mediaroom. “We are currently engaged in assessing migration opportunities with a number of customers and have been approached by many more.”

That could mean that national operators like Deutesche Telekom or BT no longer have an effective monopoly on the use of Microsoft Mediaroom in their market. Microsoft confirmed that their existing agreements are non-exclusive.

Silverlight support for H.264
Microsoft also announced forthcoming support for MPEG-4 H.264 video and AAC audio in its Silverlight plug-in. The move is a belated response to the success of Adobe Flash, which added support for H.264 a year ago. It could mean that media companies only need to support a single open standard to enable video in both Flash and Silverlight environments.

Content protection
Microsoft has also announced a new Protected Broadcast Driver Architecture in conjunction with a number of leading providers of television cards for personal computers. Microsoft says the PBDA platform is aimed at satisfying requirements for strong content protection for pay-television services.

“For the first time, we’re enabling those in the PC-TV community to build tuners and integrate almost any broadcast service into Windows Media Center themselves regardless of geographic location or television standard,” said Geoff Robertson, general manager for Windows Media Center at Microsoft.