Joost, the broadband video platform that has so far failed to find the same success as Skype did for internet telephone calls, will drop its dedicated player and become a browser-based service. It will still require users to download and install a plug-in to support its peer network distribution system. Currently in beta release, informitv took a closer look.

In a long anticipated and perhaps long overdue move, Joost has developed a new browser-based service so that users will no longer need to download a dedicated desktop application. They will still have to download a browser plug-in, so issues of software installation, firewalls, support and maintenance remain. The plug-in is necessary to support the peer network distribution approach that promised a more scalable and cost-effective solution to streaming video online.

Users are prompted to install the plug-in, which then runs in the system tray. Once installed, the video playback is smooth within a 16:9 640×360 resolution window and can be expanded to full screen.

The Joost application remains running in the system tray. The application states that a user that is not watching video is “being a good neighbour and helping other people watch video”. 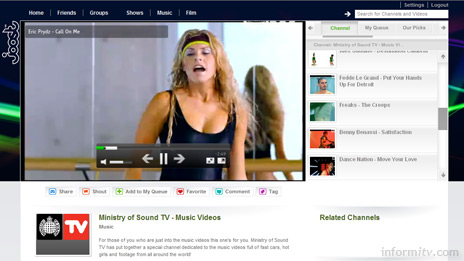 The problem is that other services can offer much the same, using Adobe Flash which is already installed on many computers, or a variety of other plug-ins.

Founded by Niklas Zennstrom and Janus Friis, the team behind Skype, and now headed by Mike Volpi, formerly of Cisco, Joost has relied upon technology to provide a disruptive edge.

It makes little difference whether this is presented as a downloadable application or an installable browser plug-in. The main problem with Joost has not just been the technology and the need to download a dedicated player, but with the programming. In this case it is not a matter of software engineering, but the material available through the platform.

The programming was simply not sufficiently compelling and it was poorly packaged and promoted. Many of those that originally sampled the service have not kept using it. There was little reason to return.

Meanwhile, television networks have developed their own web based video offerings, like Hulu, the joint venture between NBC Universal and News Corporation, or the BBC with its iPlayer. They can afford to simply stream programming directly and have a wealth of premium programming to promote.

CBS was a launch partner and investor in Joost but provides programming through a range of partners in its online audience network.

Joost will need to address its programme catalogue if it is to compete on the web. Having had the opportunity to establish a leadership position, Joost is now struggling to catch up with the competition and stay in contention.