Vusion is a four-year old Silicon Valley startup company, formerly known as Jittr Networks, that is entering the market to compete with companies like Move Networks to deliver high quality video online video. The company has come out of stealth mode to reveal a new streaming media solution that claims to enable high-definition video over existing best efforts broadband networks.

“Vusion is the first in the market to deliver true 720p HD quality video in the scale, clarity and reliability that the internet user population demands,” said Elie Habib, its president and chief executive.

“Radical changes in the way that end users access and consume video content are
driving both viewers and advertising revenues to rapidly shift from television to the
internet,” said Aaron Crayford, founder and chief technology officer of Vusion. 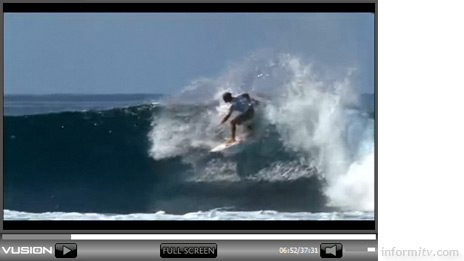 Vusion calls its technology WARP, or Wide Area Rapid Propagation, which it claims enables the service to scale to tens of millions of concurrent users. This remains to be demonstrated, but the online examples are impressive, although not immune from occasional buffering.

Like competing solutions, Vusion requires users to download and install plugin, which is designed to improve the quality of experience. It supports the Vusion proprietary Intelligent Network Streaming Protocol or INSP.

According to the company it works by continuously adjusting streaming sources and bitrates, adding temporal control that it says is missing from standard internet delivery. Thus Vusion says it significantly improves video quality compared to the best effort model of most media players.

Vusion says its service is video format agnostic and can deliver any combination of media encoded in Flash, H.264, Windows Media or Vusion’s own encrypted HD format.

It claims to support 480p, 720p and even 1080p high definition video, although the latter will be beyond the capabilities of most current displays, as well as lower resolutions.

The browser-based player is brandable, enabling customers to control the look and feel. It is supported on multiple browsers for both Microsoft Windows and Apple Mac platforms.

The Vusion vision is well thought through, but the company is entering an already crowded market, with competitors like Move Networks are already established. That said, no clear winner has yet emerged, still leaving room for new entrants like Vusion.