Fifty years after her first televised address, Britain’s Queen Elizabeth II is using the popular video sharing web site YouTube to deliver her Christmas message. The online audience will still be much smaller than those viewing on television, some of whom will be able to watch in high-definition for the first time. Sadly, the YouTube video is not shown in widescreen, so Her Majesty and the rest of the Royal Family all appear slightly distorted in the online video. 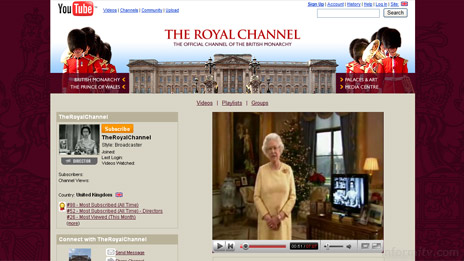 “That it is possible for some of you to see me today is just another example of the speed at which things are changing all around us,” said the Queen in her first television address, with which the fiftieth anniversary message begins and ends.

The Queen’s Christmas message has been a fixed feature of the television schedules in Britain almost every year since 1957. It follows a tradition established by King George V in 1932 at the invitation of the BBC to inaugurate the Empire Service, now known as the World Service.

A representative of Buckingham Palace said the Queen always keeps abreast with new ways of communicating with people, noting that “This will make the Christmas message more accessible to younger people and those in other countries”.

The Queen’s Christmas message has actually been available online since 1999 but its official presence on the Google-owned YouTube shows how the monarchy is moving with the times. The video is also available for download as a podcast from the royal web site.

Sadly, YouTube does not support widescreen videos in 16:9 format. It is possible to either ‘crop’ or ‘letterbox’ videos to fit their 4:3 frame. However, the widescreen video produced by the BBC appears distorted on YouTube, so that everyone appears rather tall and thin.

The Royal Channel on YouTube also features never before released colour footage from a film by Lord Wakehurst entitled Long to Reign Over Us. The former Member of Parliament, who died in 1970, was a keen amateur film maker and covered many key royal events, including the Queen’s coronation.

While the Queen’s Christmas message is still seen by millions on television and heard by millions more around the world on radio, its reach through YouTube is likely to be more modest.

So far it seems more people are likely to have seen Queen’s “Bohemian Rhapsody” on YouTube than the Queen’s annual address. The classic pop video has been viewed nearly seven million times on YouTube.

Incidentally, the most popular clip on YouTube this year is of a battle between a herd of buffalo and a pair of crocodiles in the Kruger National Park in South Africa, which has been watched more than 20 million times. Although clearly significant, such numbers are not enormous in comparison to total television viewing.

The viewing figures for Christmas Day, which typically delivers the largest audience of the year, are less than half of what they once were. In 1986, an episode of EastEnders was watched by an estimated 30 million people across the country.

The broadcast of the Queen’s Christmas message is syndicated through more than 60 broadcast networks across 120 countries, with a potential global audience of 700 million viewers.

For the first time, it is being shown in high definition in the United Kingdom, both on the new BBC HD channel, and on Sky Movies.