10.75 million viewers in the United Kingdom watched the New Year fireworks, light show and dramatic drone display on television. The number was similar to the previous year, despite a captive audience, with coronavirus restrictions confining people to their homes. Viewers in Scotland had their own display, which was rather more elegant and was watched by 1.05 million. While there were still many programmes with an audience over 10 million over the year, the power of television to bring the nation together at Christmas appears to be reduced. 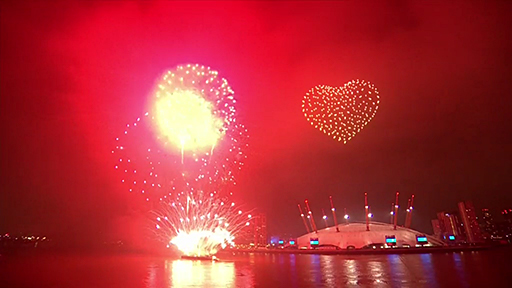 The most watched programme on New Year’s Eve was The Graham Norton Show, viewed by 5.2 million, while the Alicia Keys concert that followed and ran around midnight was watched by an average audience of 4.5 million. That suggests that many viewers watched the fireworks from midnight as a specific celebration.

6.3 million people in the United Kingdom watched The Queen’s Christmas Broadcast on BBC One on Christmas Day, making it the most popular programme of the day. A combined audience of 8.14 million watched the festive address across BBC One, ITV, BBC News and Sky News. While the audience for the Queen was slightly up on recent years, traditional television viewing seems to have fallen to a new low.

The BBC had 7 of the top 10 rated programmes on Christmas Day. The drama series Call the Midwife ranked second with 5.43 million viewers.

The serial drama Coronation Street on ITV had 4.55 million viewers, beating EastEnders on the BBC, which was viewed by 3.54 million.

The comedy Mrs Brown’s Boys Christmas Special failed to perform as well as previous years in a late evening slot, with an audience of 3.8 million.

These overnight figures do not include viewers who watch programmes within seven days of transmission.

A year before, The Queen’s Christmas Message was watched by an audience of 7.30 million on BBC One, based on consolidated seven-day viewing figures, or a total of 7.85 million across all channels. That year the Christmas Day special of the comedy drama Gavin and Stacey was watched by a consolidated audience of 17.92 million, while Call the Midwife ranked second with 8.69 million.

Given that much of the nation was in lockdown due to coronavirus restrictions, the apparent dramatic fall in viewing figures is remarkable.

It is clear that the Gavin and Stacey special on Christmas Day 2019, which was by far the most popular programme of the year, was an exception to a general downward trend.

Looking at the most popular programmes over the last decade, there are still programmes that can attract an audience of more than 15 million. It is notable that the most viewed programme in 2020 was the Prime Ministerial Statement on Sunday 10 May, watched by 18.99 million, compared to 24.46 million who watched the Olympics 2012 Closing Ceremony, or 20.73 million for an England game in the World Cup in 2018.

The BBC had just 16 of the most popular programmes of the week over 2020, with ITV winning 30 weeks with shows like And and Dec’s Saturday Night Takewaway, Britain’s Got Talent, I’m a Celebrity Get me out of Here, and Coronation Street, with Channel 4 topping five weeks with The Great British Bakeoff.

However, television can still reach a mass audience, with the highest rating programme of the week watched by more than 10 million in 21 out of 52 weeks of the year.

Part of the reason for the apparent decline in Christmas viewing may be that viewers are choosing to watch programmes on demand, through digital video recorders or increasingly through online video services.

ITV Hub had 130.49 million requests across the 36 episodes of series six of Love Island, the most popular programme on the online service. BARB ratings, which include catch-up viewing, averaged at 3.96 million per episode.

Interestingly, the second most popular programme on ITV Hub was the weekday breakfast show Good Morning Britain, with 41.70 million requests over the year.

The twentieth series of I’m A Celebrity… Get Me Out Of Here! accrued a total of 25.71 million requests across its 20 episodes. Britain’s Got Talent 12.94 million requests over its fourteenth series.

People are also turning to other forms of viewing, particularly online video subscription offerings. Six in ten households in the United Kingdom now have access to an online video subscription service. Netflix is available to an estimated 15.24 million households, while Amazon Prime Video has 10.18 million subscribers. Disney has an estimated 3.89 million subscribers and Now TV has 2.21 million.

The ability of television to bring the nation together in a shared viewing experience seems to be weakening, although people still have a desire to celebrate special moments such as the start of the new year. The importance of television as an information medium is also clear, with BBC broadcasts of Prime Ministerial announcements providing the three most watched programmes of an extraordinary year.