CBS television is to trial a new system from Sling Media to enable users to share short segments of programming using a system known as Clip+Sling. The president of CBS was joined by the co-founder of Sling Media to give a demonstration in a keynote presentation at the CES convention in Las Vegas.

“It’s great to be here among all you wikis and mash-ups and avatars,” said Leslie Moonves, the president of CBS Corporation, trying perhaps a little too hard to appear cool. His message was: “There’s no such thing as old or new media anymore. We’re just media.”

He described a symbiotic relationship between the growth of broadband and the transition to digital television, saying “at CBS we’re embracing it big-time.” Sharing the stage with YouTube and Sling Media provided some evidence of that.

“The lesson is those who don’t get in front of the parade end up marching behind it.” He said: The place for any media company serious about the future is right up front, ripping, burning, and mashing up the new beat we’re all marching to.”

“That capability sometimes comes from the most unexpected places, from services that in the past might have been seen as disruptors instead of enablers,” he said. “Part of our job as a major media company is to educate ourselves as to what the audience is capable of,” he suggested, introducing Blake Krikorian, the co-founder of Sling Media.

Sling pioneered the concept of placeshifting and as other companies have moved in to compete it is continuing to innovate around the concept. The popularity of video sharing sites such as YouTube has clearly not gone unnoticed. Capturing and uploading a clip still requires some effort, so Sling Media has decided to make it even easier.

“Now, with our new Clip and Sling functionality I can capture video from my favourite television programming, upload it, and send it to a friend in under 60 seconds,” explained the chairman and chief executive of Sling Media. 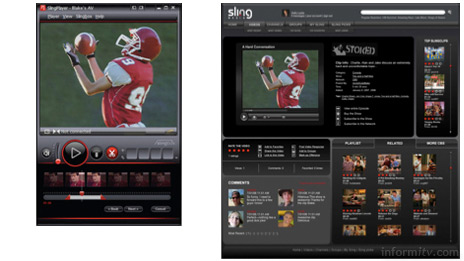 Clip+Sling allows Slingbox owners to share material directly from live or recorded television. While customers will need a Slingbox to publish clips, the content posted to an interactive portal will be accessible by anyone. It is designed to make it very easy for those with a Slingbox to share video, while enabling networks and content owners to build communities around their programming. The feature will be built into future versions of the SlingPlayer software.

Sling Media also announced its SlingCatcher product at CES. A Slingbox in reverse, it enables material from a Slingbox, or anything that can be viewed or played on a personal computer, to be received over a wired or wireless network connection and displayed on a television. The SlingCatcher can also download or stream content directly from the internet and display it on a television without the need for a personal computer.

Sling Media is discussing partnership opportunities with large and small content providers to enable them to deliver their programming directly to the television via the SlingCatcher.

Traditional media companies may previously have viewed the sharing and redistribution of their programming as anathema but they are clearly also keen to experiment themselves and embrace the opportunities that it presents.