The proportion of households in the UK with broadband is expected to double in three years, with 64% of homes on broadband by the end of 2008. The first geographic forecast suggests that the number of broadband lines in the country will rise to over 18 million.

The forecast shows that the remote rural areas where penetration is lowest today will grow fastest and catch up with the rest of the country to some extent.

The highest take-up will continue to be in prosperous areas of the south east of England. In parts of Surrey, where household take-up is predicted to be highest, over 90% of homes will be on broadband. 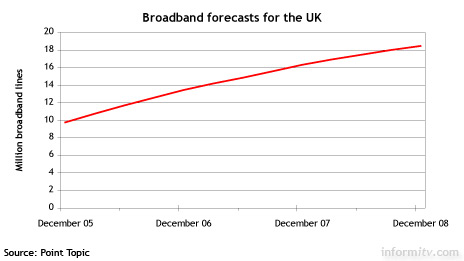 However, the forecast suggests a declining growth rate. “The market is getting much tougher,” explains Tim Johnson, chief executive of broadband market research firm Point Topic.

He predicts that the number of new broadband lines is going to fall from about 3.7 million this year to 2.2 million in 2008. “The ISPs are going to have to fight much harder to keep their share of a shrinking market,” he warns. “They’re going to be trying to take customers off each other rather than finding new ones.”

Point Topic forecasts that it will become increasingly difficult to grow the market. “By 2008 the high take-up groups — better-off families, younger professionals — are going to be pretty well 100% on broadband,” predicts Tim Johnson. “Getting older and poorer people fully online is going to be a lot more difficult, but it has to be done.”