The annual convention of the National Association of Broadcasters in Las Vegas, the world’s largest electronic media show, is witness to a revolution in television and radio as broadcasters embrace broadband, from internet protocol television to podcasting.

The world of broadcasting is rapidly opening up to new technologies. With the transition to digital and high-definition television no longer making the headlines, it is new forms of distribution that are attracting attention, and the talk is not of interactive television but of IPTV. 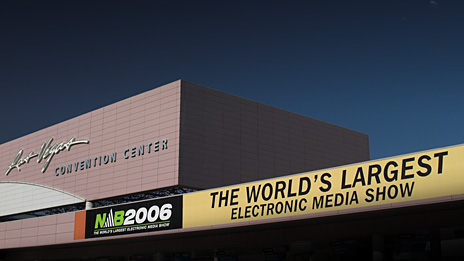 Broadband is now high on the agenda, with super sessions from Kevin Corbett of Intel on “Winning in the internet broadcast era” and Jeremy Allaire, founder of Brightcove on “Internet TV–What the new world of ubiquitous home broadband means for broadcasters”. Phil Corman of Microsoft is talking about “Next generation television”.

Show sponsor Accenture is promoting its work in the field, talking about “IPTV: realising the potential of television over the internet”.

The first day of the conference featured a full-day event bringing together the MPEG Industry Forum and the Internet Streaming Media Alliance to look at the issues around interoperability of open standards for advanced video services.

An IPTV World day in partnership with the iHollywood Forum kicks off with a keynote from Phil Corman of IBM on “Television’s promise fulfilled”.

Mobile television and video is also an emerging theme, and the subject of another day in partnership with iHollywood Forum.

There is still clearly considerable confusion about converged communications, as representatives of the broadcast, telecommunications and information technology communities persist in seeing the emerging landscape from their perspective, rather from that of the consumer.

In addition to a video channel piped into hotel rooms across Las Vegas, daily highlights of the convention are being provided as five-minute video downloads or ‘podcasts’ in conjunction with Future Media Concepts and will be available through iTunes.

The National Association of Broadcasters represents over 8,000 free local radio and television stations in the United States. The annual NAB show brings together some 1,400 exhibitors and 100,000 professionals from more than 130 countries.