With their more limited capacity telephone lines, telco television operators will deliver only the individual channel or channels selected by a particular home, and can theoretically turn this necessity into a virtue by being able to offer a greater range of viewing options.

Conventional cable television broadcasts all available channels simultaneously, which ultimately limits the number of services that can be provided. Now, cable operators are increasingly looking at delivering only the most popular channels in this way, distributing the remainder within their core network and only switching them to the home when requested.

Addressable or targeted advertising is also a focus, with various solutions on show from the likes of OpenTV, Bigband, and a new system from Tandberg.

Cable companies are also aiming to match telcos in the delivery of internet protocol services, including voice over IP telephony, and the introduction of what is known as the IP multimedia subsystem or IMS. 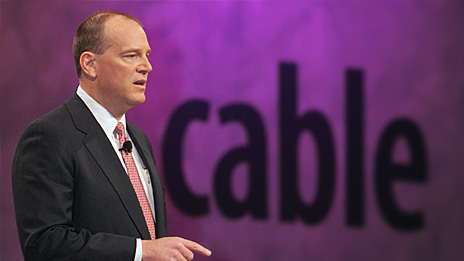 In short, presenting cable as “The Great American Success Story,” cable companies appear confident that they will not only prevail over the telcos, but they will continue to take their voice and broadband customers.

Meanwhile, they are lobbying hard to maintain a regulatory environment to ensure what they see as a level playing field with new competitors seeking to provide video services.

“At a time of great change, of perhaps the greatest shift in our understanding of communications and the consumer,” said the NCTA president Kyle McSlarrow, “it is not an accident that cable must contend with pretenders who require government help or risk being passed by.”

“Our entire industry has to step up and fight,” he said. “If others want to compete with us we can’t wait.”

Next year the National Show will take place in Las Vegas in early May, following the NAB convention.