ITV has announced the launch of mobile telephone and interactive television services to support the longest-running continuing drama in the UK.

Coronation Street, better known to its fans as “Corrie”, has been running on the commercial television channel since 1960, and has consistently been one of the most viewed programmes in the country. 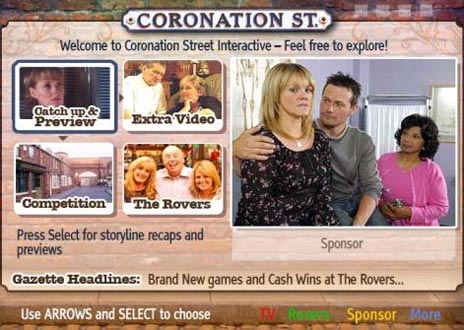 The interactive television service will provide alternative video streams, enabling viewers to watch exclusive features, catch-up on previous storylines and preview forthcoming episodes. The service will feature interviews with the cast, montages of the history of the programme, and exclusive competitions.

“Coronation Street is Britain’s best loved and most popular TV programme and we’re delighted to be launching these exciting new services,” said Jane Marshall, commercial development director for the ITV consumer division. “With Corrie joining I’m A Celebrity… and The X Factor, ITV’s mobile, online and red-button services give viewers the best interactive entertainment offered by any broadcaster.”

ITV has teamed up with Pushbutton, Tamblin and Two Way TV to deliver the interactive service. The web-based i-ZoneTV system from Tamblin will enable the production team to update content and manage a library of templates.

Viewers will also be able to use their mobile phone to catch up on the latest stories and even preview future episodes, with a Corrie Club providing text alerts. The ITV Mobile portal is built and maintained by Mobile Interactive Group and Refresh.