Puzzler Media, the leading UK puzzle publisher, is now making available through interactive television the Sudoku phenomenon that has swept the nation.

The number grid puzzle is a natural fit for interactive television, perfectly suited to the numeric keypad and cursor keys of the remote control. In fact, it is something of a surprise that it has taken so long to appear. 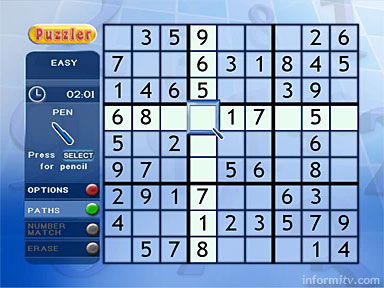 The Puzzler Media interactive TV version is available on Sky Gamestar, and the NTL and Telewest cable services. It provides four levels of difficulty, with three puzzles within each game. The ingeniously intuitive interface allows users to enter provisional numbers within a cell as they solve the puzzle using a virtual pen and pencil.

The satellite version was developed by Danish development house Codeline. It was coded in C++, which is unusual for the OpenTV environment.

“With the Sudoku craze, this was a natural progression for Puzzler Media to introduce Sudoku to its existing interactive puzzle service,” said Tony Ablewhite of Puzzler Media.

The company recently launched its first mobile phone service with consumers able to access Sudoku puzzles across all of the major networks.