The BBC has acquired additional capacity on the Astra satellite fleet, as BSkyB begins preparations to launch high-definition services next year.

SES Astra says that the BBC, which already has six transponders on Astra 2B and 2D, has contracted a further transponder, this time on Astra 2A. All three satellites are in the same orbital position at 28.2 degrees East, as used by BSkyB for its Sky service. 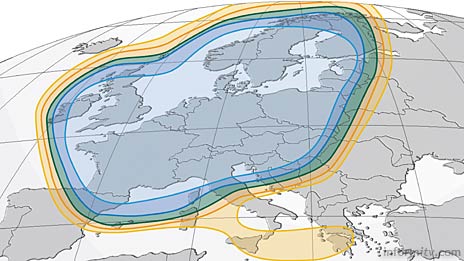 The Astra SA satellite has a footprint that extends across much of Europe, unlike the Astra 2D satellite, which is focussed primarily on the UK. It is therefore likely to be used for services that are less rights sensitive, as the BBC now broadcasts without encryption.

The BBC will use the additional capacity, which will be available from October, “to reconfigure the satellite delivery of its portfolio of TV, radio and interactive services”.

“The BBC aims to deliver its services across the UK on the platforms where our audiences expect to find them, free-to-air,” said the BBC’s acting Controller of Distribution Richard Waghorn. “The new transponder will increase our flexibility to meet our audiences’ changing aspirations for the satellite platform.”

This could include freeing up capacity for previously announced services, such as additional local news, or potentially offering other enhancements, which could include high-definition services.

BSkyB is planning to launch a high-definition service next year, probably in time for the World Cup in Germany. The UK satellite television operator is understood to be looking to lease three transponders, sufficient to broadcast at least nine channels in high definition.

The BBC has committed to moving to high definition production by the end of the decade, but officially has no plans to broadcast in high-definition. A BBC representative told informitv that “a decision had not yet been made regarding high-definition broadcasts”.

BBC Broadcast, their playout provider, which is in the process of being acquired by a group led by an Australian bank, does not currently have high definition facilities, which would require infrastructure upgrades.