The EchoStar Dish Network has added a Sporting News TV channel to its interactive TV line-up.

The Sporting News channel was developed by OpenTV and is available free of charge to subscribers of the Dish Network with compatible receivers. EchoStar Communications Corporation serves more than 11.2 million satellite television subscribers in the United States. 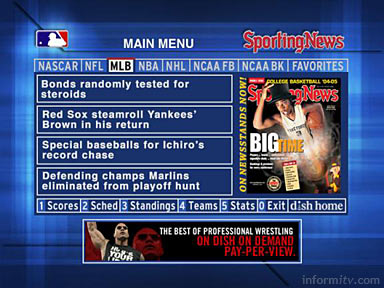 Sporting News is a weekly magazine that began publishing in 1886 and now operates radio stations and a web site.

“For over 120 years, passionate sports fans have grown to trust the experts of Sporting News Radio, Magazine, and online,” said Jason Kint, vice president and general manager of SportingNews.com. “We are excited to bring the unique, in-depth opinions of Sporting News to Dish Network customers.”