The Flanders Interactive consortium has successfully demonstrated an MHP application allowing viewers involved in the interactive cable television trial to vote on their local version of Pop Idol.

VTM, one of the commercial broadcasters in the Flanders Interactive consortium, selected Paratel to build the application for Idool, the Flemish version of the Fremantle show. VTM, together with public broadcaster VRT, SBS and the cable company Telenet, plan to roll out interactive digital services in Flanders in 2005. 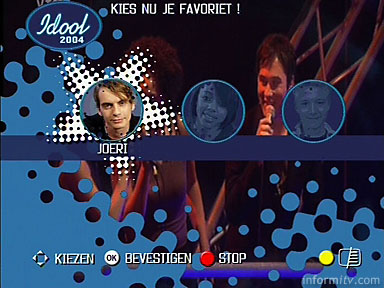 From just 300 set-top boxes currently deployed in the trial, a total of over 500 votes were counted. Voting in the trial was free, but it is planned to charge half a euro per vote following the commercial roll out. Paratel also currently handles voting over SMS and telephone services.

Following the UK example, the red button on the remote control was used to respond to an on-screen call to action prompt. The yellow button then allowed users to toggle between an overlay mode and a picture in picture view. Users were then able to select a contestant to cast their vote, with responses carried over the ‘always-on’ cable return path.

Significantly, being based on the MHP standard, no proprietary authoring tools or middleware were required. The application was built in native MHP using freely available Java development tools, with the return path managed by Java servlets running on a Tomcat application server.

Although only a small scale trial, this first use of a voting application in the Flemish trial demonstrates the apparent ease with which fully interactive MHP services can be deployed.