In his opening keynote speech at the Interactive TV Show Europe in Barcelona, BBC Chairman Michael Grade reinforced the BBC’s commitment to working more closely with the interactive TV industry. 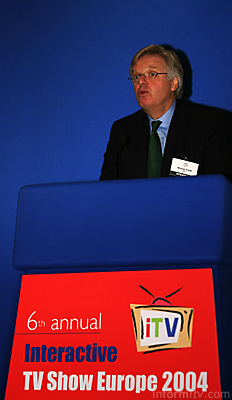 Addressing an audience of executives from Europe and America, Michael Grade said the BBC had a duty to invigorate the market by working more closely with independent production companies and sharing the BBC’s expertise.

Convergence
The BBC Chairman pointed out that convergence was unlikely to mean the emergence of a single box killer device.

“For the last ten years convergence has always been just around the corner. And, guess what, it still is.”

As most people leave mobile and complicated lives, they want different devices that allow them to do different things when, where and how users need to, from domestic television to personal computers, personal digital devices and mobile phones.

“The BBC can, and does, deliver content to all of them. That’s quite a challenge.” He said the problem “turned out to be how to tailor our content so that it worked for each device as though it had been uniquely created for it.”

As an example, the BBC Chairman spoke of the coverage of the Olympics.

“The rate of increase in the numbers pressing the red button during big events is truly awesome. The red button empowers our audiences, giving them the chance to tailor our output to their needs.”

“One of the big challenges facing all content providers is: how do we make our content more personal and more engaging? By its very nature interactive helps us achieve this.”

However, the Chairman claimed that the BBC considered providing a mobile text alert service, but concluded that the market was well supplied with such services and therefore “stayed out of that game”.

Content
Michael Grade argued that technology is only a means to an end and that is the provision of great content. Technology ultimately just provides another distribution channel.

He added that production values of interactive material have to be the same as linear material: “don’t short-change your interactive audiences”.

In addition, compelling content needs to be integrated from the outset: “You are much likely to achieve compelling interactive content when you stop thinking about it as an add-on and start embedding it into the creative process right from the start.”

He concluded: “If you want converged output, start with converged input.”

No going back
The BBC Chairman said that “once you’ve started down the interactive path, there’s no going back”.

The BBC has now created the expectation among its audiences that certain kinds of events, particularly multi-event live sport occasions like the Olympics and Wimbledon or other landmark programmes, will come with a powerful interactive component.

“We are almost certainly heading into a world where interactivity will become the norm for some key programme genres.”

Beyond that, he speculated the red button may ultimately become redundant, leading to “a world where all TV is interactive all the time; where viewers expect to be able to configure and reconfigure their TV to deliver exactly what they want, just as they now do with their PCs.”

News
The BBC will be extending its flagship evening news programme with addition of specially commissioned background material available through an interactive service.

Currently, the BBC’s interactive news service consists of a catch-up service, with headline summaries of news, sport, business and weather.

Unlike the existing interactive news service, Ten Extra will only be available during the Ten O’clock News bulletin, and for a short period afterwards.

Michael Grade described it as an experiment, a toe in the water, saying “If it works out, it will mark a real breakthrough in the provision of public service news”.

Shared experience
He said that each time the BBC experiments in this way, the experience is different, genre by genre, across both live and pre-recorded output.

“We really are just beginning to scratch the surface of what interactive can offer. But already the BBC has a great store of knowledge – almost certainly greater than any other broadcaster in the world.”

For the Chairman of the BBC, together with the other Governors, there is a duty to ensure that the BBC does not abuse its privileged position in the marketplace, “that includes ensuring a level playing-field in the supply of content as between BBC in-house producers and those working in the independent sector”.

In practice, he said, the BBC works on all three digital platforms and there are not many companies that have the capability of working across all three. However, the technology for Ten Extra is being provided by Two Way TV on satellite, terrestrial and cable television.

He added that “the BBC has been able to achieve its current leadership position in interactive partly because its secure funding has allowed it to make substantial investments in this new technology at a time when others in the industry have not been able to.”

This puts certain obligations on the BBC, including an obligation to invigorate the market: “I consider the great store of knowledge the BBC has amassed about interactive to be not just a BBC resource, but a resource for the whole industry – including other broadcasters.”

The Chairman’s comments may be seen as a pre-emptive commitment to working more transparently with independent companies in the interactive television space, in an attempt to avoid allegations of market dominance that have been previously addressed at the BBC’s successful online operation.