The BBC iPlayer received an average of 9.9 million requests a day in February, up from 9.8 million a day the previous month, which was also a record. Yet the average number of requests per month and the total annual requests rose less in 2016 than in any previous year, up less than 3%.

There were 277 million requests for television programmes across all BBC iPlayer platforms over 28 days in February, compared to 304 million over 31 days in January. The numbers are up 16% year on year, although the figures are not directly comparable due to a change in reporting methodology in July 2016.

The most requested programme was the gritty two-part drama The Moorside, based on the disappearance of a nine-year-old girl, which received 2.49 million requests for the first episode and 1.97 million for the second.

The top 20 programmes, which all received over a million requests, were all episodes of dramas, eight of them being episodes of the long-running serial EastEnders.

The most requested non-drama programme was a Wales against England rugby match, with 688,000 requests.

The figures indicate the long-tail distribution of usage. Out of 277 million requests, the most popular programme accounted for 1.61%. The top 20 episodes made up just over 10% of all requests. Put another way, 90% of usage was for episodes that received fewer than a million requests over the month.

BARB data show that the first episode of The Moorside received a total of 9.96 million views in 7 days, rising to 11.36 million over 28 days, making it one of the most watched programmes of the month. So over a fifth of its audience was through BBC iPlayer.

The rugby scored 6.52 million viewers in total, so just over a tenth of the audience was through iPlayer.

No programme from BBC Three, which went online only a year previously, featured in the top 20. The ancestry series Who Do You Think You Are? ranked twentieth at 540,000 requests. 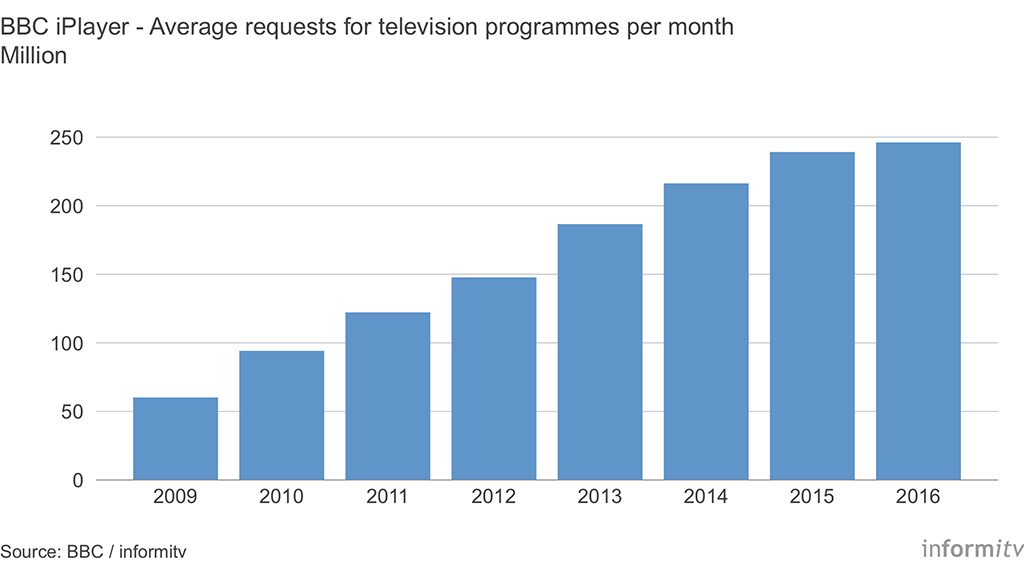 While the overall trend for BBC iPlayer usage continues to rise, the average number of requests per month rose less in 2016 than in any previous year. The monthly average for 2016 was 246 million requests, compared to 239 million in 2015. Usage tends to be less in the summer months compared to over the winter.

This apparent reduction in the otherwise relentless rise in usage of the BBC iPlayer might be accounted for by the change in data collection methodology in the middle of the year. Alternatively, it might indicate that demand is starting to slacken off, even though there are more ways to access the service.

That could be bad news for director general Tony Hall, who began the year saying the BBC needed to reinvent iPlayer and “make the leap from a catch-up service to a must-visit destination in its own right”.