The latest issue of the informitv Multiscreen Index of 100 leading pay television service providers worldwide shows a total quarterly increase of 3.45 million subscribers, up by 0.80% over the third quarter of 2016, compared to 3.74 million or 0.95% a year previously. 57 of the 100 services in the Multiscreen Index reported net television subscriber gains in the third quarter, compared to 59 in the same period a year previously.

AT&T U-verse had the largest loss of subscribers, down by 326,000, although the AT&T satellite subsidiary DIRECTV gained 323,000.

Six of the top 10 services in the United States lost television subscribers in the quarter and they were collectively down by 73,000 over the quarter and 357,700 year on year.

Across North, Central and South America there was a modest quarterly increase of 0.25 million subscribers, reversing a regional decline in the previous quarter. 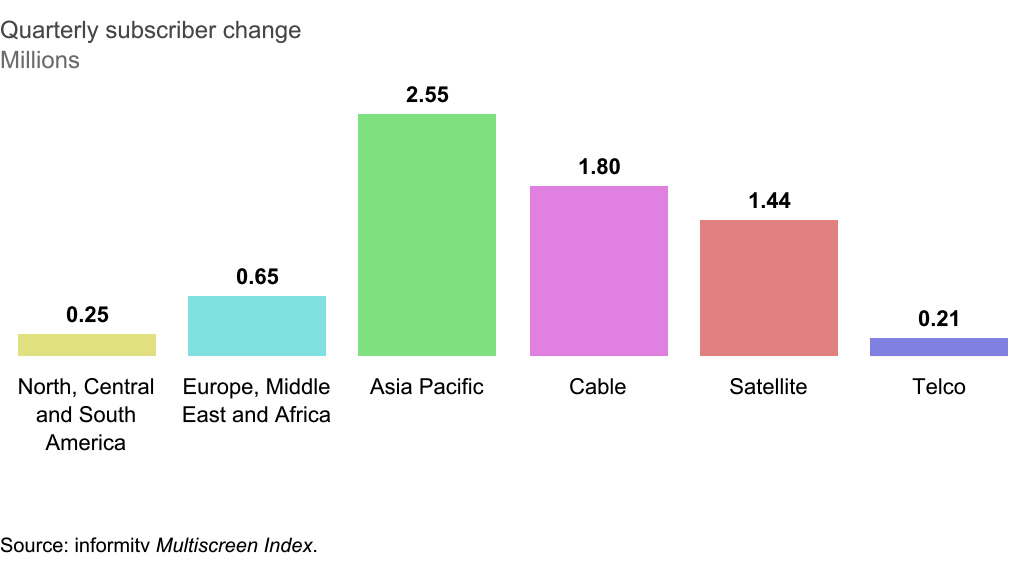 “Once again the largest increase was in the Asia Pacific region, which has added 14.37 million television subscribers in 12 months,” said informitv analyst Dr Sue Farrell.

“Six of the top 10 services in the Europe, Middle East and Africa region gained television customers,” noted Dr William Cooper, the editor of the informitv Multiscreen Index. “The region saw a modest increase of 0.65 million over the quarter.”