Comcast has reported an increase of 24,000 video subscribers in the first quarter of 2014, after changing its method of calculating the numbers. Irrespective of how it reckons its video customers, it still has 218,000 fewer than the previous year. Comcast hopes to merge with Time Warner Cable, which lost 34,000 video customers in the quarter and 748,000 over a year. However, the informitv Multiscreen Index shows that their combined loss of cable television customers over the year is less than the net additions of the two main telco television services in the United States over the same period.

The largest cable company in the United States now uses what it calls the billable customers method for calculating its subscriber numbers.

Essentially, this means Comcast now counts customers in apartments, healthcare facilities and other multiple dwelling units billed under bulk contracts based on the number of residents that “have the ability to receive additional cable services” such as additional programming, high-definition or digital video recording services – whether or not they actually receive them.

Previously, these customers were reported on what Comcast calls an equivalent billing unit basis, by dividing the total monthly revenue received for the property by the average value of residential rates in the area.

Michael Angelakis, the chief finance officer of Comcast, said the new method “improves our customer transparency and aligns our customer count methodology with the rest of the cable industry.”

According to its new calculations, Comcast ended the first quarter of 2014 with 22.6 million video customers, including both residential and business customers. That is 24,000 more than the previous quarter and 70,000 more than six months previously, but 218,000 less than the prior year, measured on the same basis.

It is the second quarter increase in subscriber numbers for Comcast, after seven years of consecutive quarterly losses.

If Comcast had continued to use its previous method of counting, it would have reported an increase of just 4,000 video customers in the first quarter of 2014, although that compares to a net loss of 60,000 in the same quarter the previous year.

The net result of the new methodology is that Comcast is reporting over 900,000 more video customers than it said it had at the end of 2013.

However, the number of video customers paying for advanced services, namely high-definition or a digital video recorder, rose by just over 100,000 in the last quarter and 560,000 over a year. It now stands at 12.6 million, which is just under 56% of its billable customers.

Comcast is rolling out its X1 boxes at a rate of 20,000 a day, which it says is double the deployment rate of six months previously. Brian Roberts, the chairman and chief executive of Comcast said churn among these customers is down 20%-30%, while overall viewing has increased. Its new XFINITY TV app now enables our customers to stream virtually their entire television lineup on any network connected device in the home and watch digital video recordings in or outside the home. 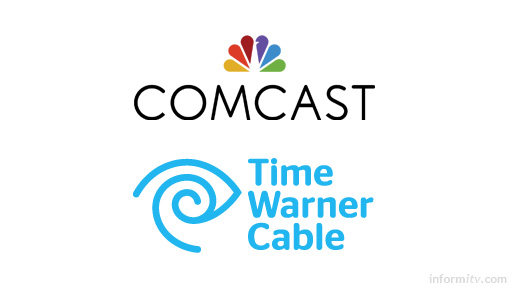 Comcast plans to merge with Time Warner Cable, the second largest cable company in the country, which reported a quarterly net loss of 34,000 video customers, which is its lowest loss in five years. It ended the first quarter of 2014 with 11.2 million residential video customers, 748,000 fewer than a year previously and 1.3 million fewer over two years.

In the case of Time Warner Cable, the number of customers taking a single service has risen slightly, while the number taking two or three services has fallen slightly, and overall customer relationships are down over the year from 14.7 million to 14.5 million.

The number of Time Warner Cable customers with a digital video recorder has also fallen by 350,000 over a year, to 4.7 million.

Total video revenue also fell over a year, to just under $2.5 billion for the first quarter of 2014, compared to $2.7 billion in the same quarter a year before.

Taken together, Comcast and Time Warner Cable had 10,000 fewer video customers at the end of the first quarter of 2014 compared to the previous quarter and 966,000 fewer over a year.

There are signs that their combined loss of video subscribers is slowing, although this can be confused by seasonal factors. They still have 33.76 million video customers between them, so a net loss of 10,000 is hardly significant.

Does the apparent decline in cable television subscribers that customers are leaving pay-television services? Not necessarily. AT&T added 201,000 U-verse video customers in the quarter, and 893,000 over the year. Verizon added 57,000 FiOS video subscribers in the first quarter of 2014, with an increase of 424,000 over the year. Between them, AT&T and Verizon saw a net gain of 1.3 million video customers over a year, which is more than the combined losses of Comcast and Time Warner Cable.

Pending approval of a merger with Comcast, Time Warner Cable has announced a partnership with Fan TV, a San Francisco start-up company. Through a small streaming media box that retails for $99, Fan TV claims to combine cable programming with with on-demand streaming services. These currently include Redbox Instant from Verizon. Mike Angus, the general manager for video at Time Warner Cable described Fan TV as “the perfect marriage” of “compelling content” with “complementary services”. A notable feature is the remote control, with a single touch sensor rather than any buttons. 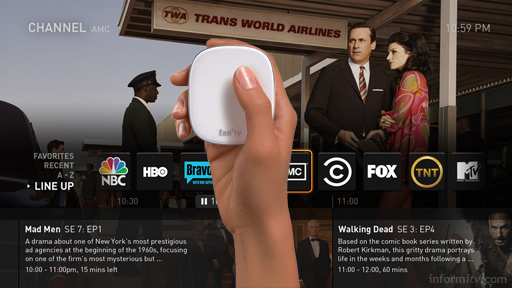 In the event that the merger of Comcast and Time Warner Cable is approved, it is expected that the combined group would divest some subscribers to placate competition regulators. So it is convenient that Comcast has managed to find 900,000 more video customers.

Charter Communications would be the beneficiary, becoming the second largest cable company in the country and the fourth ranking pay-television service provider in the United States, behind a combined Comcast Time Warner Cable and the satellite services from DiRECTV and DISH Network, overtaking the telco services AT&T U-verse and Verizon FiOS, at least for a while. These six service providers would have over 80 million video subscribers between them, out of around 115 million television homes in the United States.