Sony has launched its Video Unlimited 4K online store with around 70 titles available in Ultra HD for rental or purchase to download to a dedicated media player and display on an Ultra HD television. Continuing the push for 4K Ultra HD images, Sony has also launched a consumer camcorder with four times the resolution of high-definition television.

The Video Unlimited 4K service is currently only available in the United States. Television episodes will be available for $3.99, with movies for $7.99 for a 24-hour rental, or $29.99 to purchase, in some cases including an UltraViolet licence to allow it to be viewed on other devices in standard or high-definition.

The dedicated FMP-X1 Media Player comes with a two terabyte hard drive, able to store up to 50 feature films, and comes bundled with a selection of 10 titles, the most recent being Total Recall. It costs $699 or $599 if bought with a Sony 4K television, which start at $3,499. 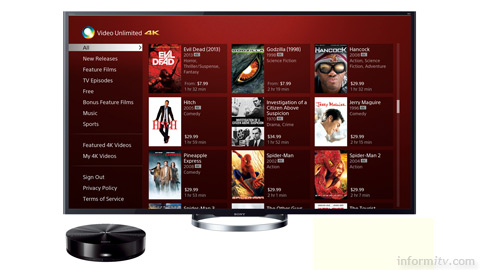 Users of the unlimited video service, which is currently rather limited, may want to check that they have an unlimited internet connection. Each title will be around 45-60 gigabytes, using H.264 compatible compression from Eye IO, a company based in Pala Alto, California. In the future, H.265 High Efficiency Video Coding could halve the file size, but some people could quickly run into monthly bandwidth limits imposed by some broadband providers.

“We have been spearheading the advancement of 4K Ultra HD technology from the start, and have now reached another milestone as promised with the Video Unlimited 4K service going live,” said Sony Electronics President and chief operating officer Phil Molyneux.

Chris Cookson, the president of Sony Pictures Technologies said: “Sony Pictures has been working in 4K for several years. 4K mastering and restoration allows us to capture and convey more of the information from a film’s original 35mm negative, while new 4K cameras like the F65 offer higher resolution and expanded colour palettes to help us create ever-more immersive experiences for audiences in theaters and at home.”

Sony is also making 4K more accessible to prosumer users with the launch of a 4K camcorder.

The Sony FDR-AX1E camcorder can store up to two hours of 4K video at 50 frames per second on a 64 gigabyte memory card, or three hours of 1080p50. 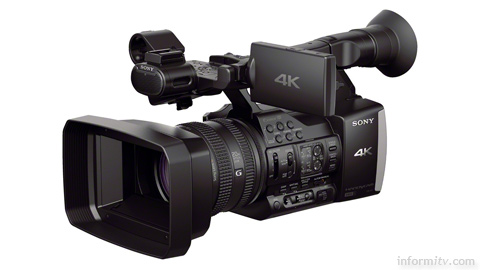 The camcorder will support the latest HDMI 2.0 standard, the first to enable 4K connections, to hook up to a compatible device or display. Alternatively, it can output to any high definition television.

First seen as a prototype at the CES show in Las Vegas, it was on show at the IFA electronics expo in Berlin.

At around $4,500 it is not a cheap option for consumers, but it makes 4K production more affordable, even for wedding videos.

Panasonic also showed a prototype of its 4K camcorder but this was not available for demonstration.

Announcing the products at the Sony press conference in Berlin, Kazuo Hirai, the president and chief executive of Sony Corporation said: “Each of these is a symbol of Sony’s product-led revival. These products will dramatically enhance the way you play, watch, listen and create.”

The move to 4K will be driven not only by pay-television platform operators but also by consumer electronics products that are raising expectations of quality.

Prices will inevitably fall as products move into the mainstream, so the pressure will be on broadcasters and pay-television operators to provide pictures that meet the expectations of high-end consumers.

William Cooper of informitv will be chairing The Great Quality Debate at the IBC Conference in Amsterdam on 14 September 2013, moderating teams of speaker responding to the question: Do we really need to go beyond HD?