There are now over 650 million fixed broadband subscriptions worldwide, while the adoption of IPTV has reached just under 80 million, or 12% of broadband customers. Most broadband connections are still over telephone lines, but the adoption of hybrid fibre-based technologies continues to grow.

Point Topic, which tracks the take-up of fixed broadband services, reported a drop of 2.8 million subscribers based on copper circuits in the first quarter of 2013, the second successive quarterly decrease following a decade of growth.

Fibre connections, including both fibre to the home and other forms of fibre where only the last few hundred metres are over telephone wire, grew by nearly 10% in the quarter. With a 22% share of the market, they are now the second most popular access technology, behind copper but ahead of cable.

Most of the decrease in copper subscribers originates in Asia, which also has the largest market for so-called FTTx hybrid fibre and copper technologies. 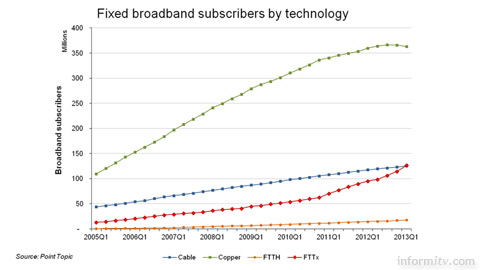 “Of course copper remains the dominant service for most users across the world,” commented Laura Kell, Operations Director at Point Topic. “But we believe that we are starting to see a shift in technology, particularly to fibre and hybrid fibre, as consumers require and will pay for higher speeds from their broadband connections.”

Hybrid fibre deployments far exceed pure fibre to the home, increasing connection speeds “but perhaps at the cost of the ‘future proofing’ that end to end fibre provides.”

East Asia accounts for almost half of all net additions worldwide, a percentage that has increased due to slower growth in Europe and North America, where penetration is higher and closer to saturation.

Across Europe, over 99% of homes have the possibility of accessing a basic broadband network, using either fixed or wireless infrastructure. Over 53% of households could theoretically access services above 30 megabits per second, although the actual experience of many will be significantly below that.

The cost of investment to bring such coverage to the rest of Europe is estimated by Point Topic to be €80 billion, which is significantly less than the €180 to €270 billion that the European Commission has previously quoted.

France has among the lowest coverage of superfast broadband, despite having one of the highest penetrations of television services delivered over broadband in the world.

China continues to lead the league of IPTV countries, with over 21 million subscribers among its vast population, while France has 13.8 million and the United States has approaching 10.8 million. South Korea and Japan have 6.9 million and 4.4 million respectively, followed by the Russian Federation and Germany with around 2.6 million and 2.5 million each, the Netherlands and Belgium with 1.5 million and 1.4 million, and Taiwan with 1.1 million.

While telecommunications companies have typically seen the provision of television and other entertainment services as key drivers and differentiators for broadband, the ability to deliver fast and reliable network coverage has far wider and more significant economic benefits.