The Seiki SE50UY04 uses an LED edge-lit LCD panel from Tiawanese manufacturer Chiemei. A 65″ and a 39″ screen model are due out later in 2013.

The smaller screen size is particularly interesting, given the conventional industry wisdom that viewers will not see the benefit of 4K resolution on displays of less than around 60″ diagonal. 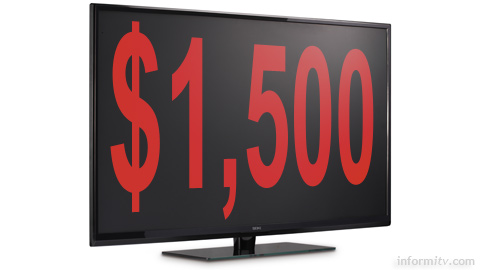 So why would anyone want such a screen, given the lack of available ultra-high-definition television and video material?

One possibility is simply upscaling existing high-definition material. The display will accept a high-definition signal and use interpolation to scale it to the 3840×2160 native resolution of the panel. That should mean that pixel structure is less evident on close inspection, resulting in improved perceived quality.

The display can also be connected to a computer to display very high-resolution images, with applications in design and photography. A 4K screen has less resolution than many still cameras, but is better able to display photographic images than most computer monitors or high-definition televisions.

Then there are games. The latest graphics cards will happily display 4K images and the next generation of games consoles is likely to support such resolutions.

The problem is that an HDMI 1.4 connection is currently limited to 30 frames a second at this resolution. The HDMI 2.0 specification is expected soon which should double that. The display itself can refresh 120 times a second.

Notably, the Seiki display does not come with 3D or Smart TV capabilities. While the major manufacturers continue to compete with such features, Seiki is competing on price.

“The introduction of Ultra HDTV is perhaps the biggest news since the first arrival of HDTV, and SEIKI is leading the charge to make the next generation of high-definition entertainment attainable for today’s television buyers at an affordable price,” said Frank Kendzora, executive vice president at Seiki.

Expect to see UHDTV screens become mainstream within a few years, just as high-definition has become the new standard. The price premium will fall with volume and it will be difficult to sell anything less than 4K.