The Australian Broadcasting Corporation has launched its own television companion app for the Apple iPad, just in time for the Australia Day weekend. It competes with other companion apps like Fango, Jump In and Zeebox, which are promoted by rival commercial channels in Australia. That seems to be about three too many apps already, so is the abundance of second screen applications helping with programme discovery or creating its own navigational challenges?

The ABC TV Companion is a social second screen application intended to connect viewers to programmes and allow them to share their views, and to discover new shows and programmes available to view on iview.

There is a schedule planner with favourites, reminders and check-in features to allow friends to see what you are watching and improve programme suggestions. However, it only shows programmes from ABC channels and that does not include its radio networks. 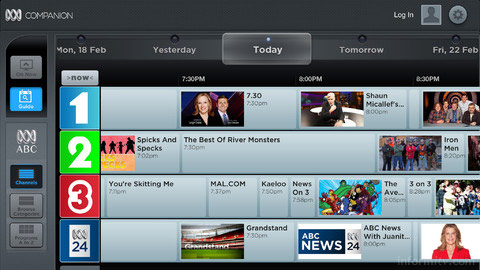 There are links to programmes available to view on demand in iview, which is a separate application for catch-up programmes, rather like the BBC iPlayer.

There is also a play-along element, enabling viewers to interact with certain ABC shows, take part in quizzes and polls, and view extra information, synchronised with programmes. 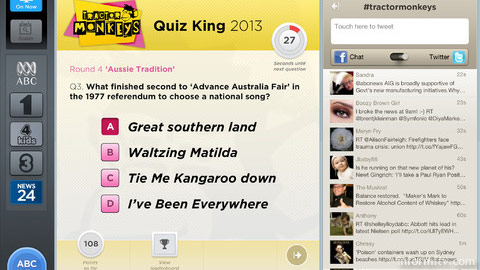 These are all models that have been previously adopted for interactive television but this simply requires an iPad to enhance the television experience.

It remains to be seen whether there is a need for dedicated applications to provide a social television experience, if there is a place for new entrants like Zeebox, or whether people will simply use Facebook or Twitter.

Each network, it seems, has its own ideas about how to engage viewers on the second screen. Broadcasters naturally want to create their own branded experiences. For avid ABC viewers, a dedicated app may make sense. Most television viewers, however, will watch programmes across a range of networks and would benefit from a consistent user experience across them.

Ironically, the proliferation of apps from multiple networks risks complicating rather than simplifying the user experience.

Meanwhile, pay television platform operators are in the business of aggregating channels and providing a coherent and consistent experience across them. Increasingly this, as much as access to programming, is becoming the user proposition.

This is where a common platform, like Freeview in Australia, could bring benefits to all its free-to-air broadcaster shareholders. It already provides an electronic programme guide and a web site with programme listings, but as yet there appears to be no mobile app.

Freeview in the United Kingdom has apps available for Apple and Android devices. This is surely a missed opportunity for free-to-air broadcasters in Australia.