Sky has released an update to its Sky+ app, allowing an Apple iPad to be used as a remote control for the Sky+ HD box. Users can change channels directly from the grid guide, and pause, play and rewind programmes with a single tap or swipe of the screen. The app significantly transforms the overall user experience for those with an iPad and a compatible Sky+ HD box.

Sky customers can also manage their programme planner through the app, allowing them to add and delete recordings they have stored without interrupting viewing on the television screen.

The television guide on the app has been redesigned, with new genre tabs and improved search and navigation. Users can set recordings for programmes and series over the following seven days. Remote recordings can still be set outside the home, delivered over the satellite signal. 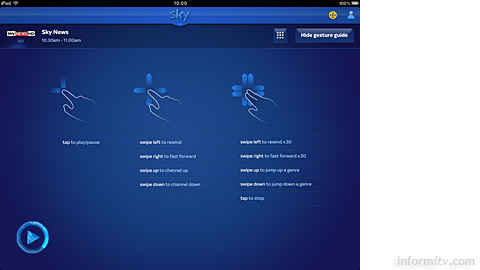 The new free Sky+ app is available through iTunes. The remote control features require the new look Sky Guide on a compatible Sky+HD box, which excludes those manufactured by Thomson, connected to the same computer network as the iPad.

Unfortunately, the Sky+ app does not offer any control over audio volume or muting, because that is done through the television display.

The app should allow the Sky+ HD box to be remotely controlled from anywhere in the home, which may or may not be a good idea. More than one instance is supported, providing they are on the same network. There does not appear to be any way of controlling which apps can connect to the box.

The remote control features are not currently available when the app is used on an iPhone or iPad Touch, although there seems no reason in principle that this could not be supported in the future. The same applies to Android versions of the App. 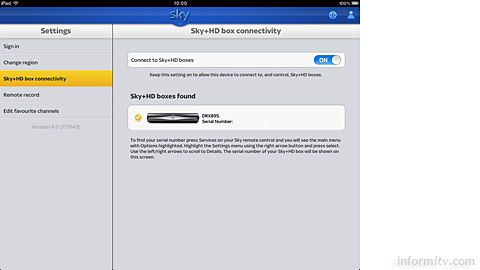 We initially found that the app was unable to find the Sky+HD box on the network. This seemed to be solved by simply turning things on and off again and reinstalling the app, but other users are still reporting problems and Sky provides limited information to assist with troubleshooting.

This illustrates the problems of increasing complexity that service providers face when dealing with different devices in the network-connected home. When things work they can be wonderful, but when they do not problems can prove very difficult to identify and resolve.

“The Sky+ app has proved hugely popular, with millions of Sky customers embracing the convenience of being able to set recordings of their favourite shows while they are on the move,” said Luke Bradley Jones, the brand director, for television products at Sky. “We’re now taking the Sky+ experience one step further, handing our customers even more control over their planner — not to mention being able to use the app to change channel and play, pause and rewind their favourite TV.”

Sky is also planning to integrate Zeebox functionality into its app, allowing users to follow online reaction to programmes through integrated Twitter feeds.

The new app offers significant benefits to users allowing programme search and navigation to be performed on the second screen without interrupting normal viewing. It enables Sky to update and extend its user experience beyond the limitations of the set-top box, giving it a new lease of life through the tablet. Rather than a substitute, the second screen is a complement to the traditional infra-red remote control, which remains more directly accessible for basic functions.

Virgin Media has been promising something similar for its TiVo customers for some time, now due before the end of the year. YouView has no second screen application to offer at the moment but will need one if it is to provide a competitive alternative to Sky or Virgin Media.