At the CES trade show, LG previewed an 84-inch screen with a resolution four times that of full high-definition displays. That is 3840×2160 pixels, which is technically known as Quad HD. 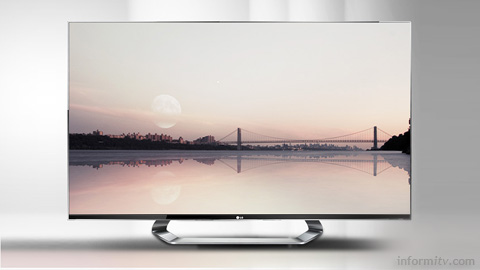 In digital cinema, 4K generally refers to a resolution of 4096×2160 pixels. This is a development of the 2K format which has a resolution of 2048×1080, which is the same number of lines as full high definition television, but with a slightly wider aspect ratio.

4K was developed because the 2K resolution used in many digital cinemas is arguably inadequate when seen on a relatively much larger screen at a far greater viewing distance.

Confusingly, the terms 4K and 2K refer to the number of horizontal pixels, rather than the number of vertical pixels used to describe 1080p or 720p high-definition television pictures.

Some may question the need for such high resolution in the home, arguing that the difference between 1080 lines and 2160 lines is hardly noticeable, and certainly less so than the step from 480 or 576 line standard definition images to 1080.

It might be argued that with current domestic display sizes the human eye is simply unable to resolve that level of detail at typical domestic viewing distances. People will refer to visual acuity in degrees of arc, based on assumed viewing distance of around ten feet, although in many homes it may actually be closer than that.

So why would we want such resolution in the home? There will be home cinema buffs that want to recreate as far as possible the theatrical experience in the home. For most people, the practical size of screen that they can have in their home, and the distance they can physically be from it are likely to be limiting factors.

However, television is not the cinema and people do not generally watch it in the same way. For one thing, people often move closer to a screen than they would in a cinema setting, even if only while walking around the room. That defines their perception of definition. And close up, most television displays do not really look that good.

You see, the human visual system is not simply a matter of optical resolution. Our perception of the real world is based on close inspection and the formation of a conceptual framework. We know that people generally have hair, even if we are at a distance and cannot see the individual strands.

If we want to examine the quality of something there is a natural tendency to want to inspect it at close range. Just observe people in an art gallery, or a television showroom.

The interesting thing about a 4K display is that the pixel structure is hardly evident even on close inspection. That perception of quality is retained even from across the room where our eyes may not objectively be able to resolve the same detail. We subjectively know it is a better image. It is all in the mind.

Furthermore, a high-definition screen in the home is unlikely to be used solely for showing movies, or even television. It is increasingly likely to display text and graphics, where high resolution is required to display fine lines and avoid aliasing artifacts. That will allow elegant design and typography, which has previously been the preserve of print reproduction.

If Apple is preparing to produce a television display, as some have suggested, with a display size of 32 or 37 inches, is it likely to be limited to high-definition resolution? That seems even less likely for screens of larger dimensions.

In the context of computer displays, a resolution of 3840×2160 seems less outrageous. After all it is just over eight million pixels, or 8 megapixels. Most digital cameras can produce such resolutions, including many smartphones like the latest Apple iPhone.

Semi professional still cameras produce images of over 20 megapixels. There are currently no flat screen displays that can reproduce such resolution, although in print terms it is only really considered good enough for an 18×12 inch print.

Imagine being able to view the full resolution of digital still images on a large flat screen. Display resolutions will no longer be dictated solely by broadcast standards. Even the current generation of 1080p full high-definition displays are capable of displaying higher resolutions and frame rates than most broadcast signals.

One argument for a Quad HD display is to allow the presentation of 3D video in full high definition using passive polarised glasses. However 3D video is currently generally transmitted in formats that combine both stereo images in a single high definition frame, so the resolution is already compromised.

3840×2160 is also exactly a quarter the resolution of Ultra High Definition. At 7680×4320 pixels, 16 times the resolution of high-definition, this simply has to be seen to be believed. Currently in development, we expect to see further trials at the London Olympics.

Display manufacturers can continue to compete on screen size, and many people will tend to want to buy the largest screen size they can afford, even if it does not fit comfortably in their home. It is how some people like to show off.

However, we may be approaching the practical limits on what consumers will accept in their homes. Thereafter, manufacturers will increasingly compete on other aspects of quality, notably resolution. So a smaller screen with higher resolution will actually provide a better quality, higher fidelity image.

So expect to see more and more so-called 4K displays, whether or not broadcasters are remotely ready to deliver such resolution.