Livestation brings together some of the leading international television news channels, including the BBC, CNN, NHK, Al Jazeera, Euronews, France 24, Deutsche Welle, Russia Today, CNBC and Bloomberg. It has been several years since informitv helped to devise and implement the global news channel aggregation model for Livestation and it has been through many changes since, but the recently renovated proposition finally appears to be resonating with users. The freemium service reports receiving over 75 million unique visitors in 2011. Livestation has now revamped its web site, increased the quality of its streams and added social features, integrating Facebook and Twitter. The offering is also extending to apps on smart televisions, smart phones and tablets.

Livestation was originally conceived in 2007 at Skinkers, a web development company in London, using peer-to-peer live streaming based on technology originally acquired from Microsoft Research in Cambridge. Despite winning a MediaGuardian Innovation Award, it rapidly became apparent during trials that simpler approaches to streaming would be more effective, which informitv strongly advised and were ultimately adopted.

In the intervening years Livestation appeared to lose its way, experimenting with adding user contributed channels, a legally risky strategy that seemed unlikely to find favour with broadcasters and failed to gain momentum with users.

Livestation was subsequently spun off as a separate company. In April 2011 Lippe Oosterhof was appointed as chief executive, replacing the founder Matteo Berlucchi, who remains as a non-executive director, together with chairman Philip Rowley.

The Livestation proposition now appears to have refocused on the original concept of licenced distribution of news channels, with a cleaner web site and a clearer proposition. The rather ingenious navigational motif we designed has sadly been dropped in favour of a simpler triangle indicative of a play icon, like many other online video players, but the logotype, developed in association with design agency English & Pockett, has been retained. 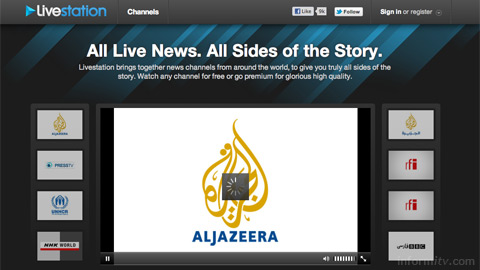 Users can now share links through Facebook to what they are watching and converse with other users or even grab a screenshot and link it through Twitter, presumably under fair use for the purpose of commentary.

Livestation is also available as a free desktop application and as an app for Apple devices, with Android and smart television apps in the pipeline.

The platform is largely funded by advertising, but a premium subscription offering is available for $2.99 a month offering channels including CNN International, Bloomberg and Al Jazeera in higher quality streams.

Livestation reports receiving around 15 million unique monthly visitors, generating over 30 million video views a month, watching an average of 13 minutes per visit. Granted that may not sound much in the context of some other streaming sites, but it shows a level of audience engagement on which the platform can build.

The reality is that while these international news channels may theoretically reach hundreds of millions of potential viewers, their audience for most of the time is relatively low and difficult to measure. That is where online distribution counts — providing evidence of active viewing.

Although many of these channels are available to satellite viewers who seek them out, bringing them together online allows them to reach new international audiences, particularly where they are not carried on local cable networks, for commercial or political reasons. It also brings together different perspectives on world events.

That raises interesting editorial issues. While some channels may pride themselves on impartiality, others have their own agenda. Not least, Press TV, an Iranian news channel that is still being carried on Livestation, despite having its broadcast licence revoked by the United Kingdom media regulator Ofcom and consequently being removed from the Sky programme guide.

“Livestation’s mission is to make it easy for viewers to discover, compare and share live news channels. Livestation helps viewers to see all sides of the story,” its chief executive told informitv. “Our growth in 2011 shows there is strong demand for a live news aggregator — this year we will add many more news channels and make it even easier to compare their editorial coverage.”

Livestation is an example of the potential for an online video platform to aggregate traditional live television channels and address a global audience. The premise of the original peer-to-peer approach was to enable this to scale to simultaneous audiences of millions. That will remain a theoretical technical challenge, but for the moment the issue still remains reaching such audience sizes. Nevertheless, Livestation appears poised for further growth.