Burst Media, a subsidiary of video search company blinkx, has introduced thematic online video channels to create new opportunities for advertisers and web publishers. Covering a range of lifestyle subjects from food to fashion, the aim is to aggregate short-form programming across a network of sites to create virtual video channels that could be seen by millions of viewers. The chief executive of blinkx spoke to informitv to explain the concept.

The 12 new channels are available to Burst’s network of independent publishers, which can incorporate the video programming into their web sites. In aggregate, that network presents an opportunity to reach up to 150 million unique users, currently generating 35 billion page views per month. The channels currently carry selected short-form programming from partners including Reuters, Howcast and TV Guide.

One of the channel brands is “ella”, with channels covering fashion, music and entertainment, which can be added to third-party web sites. 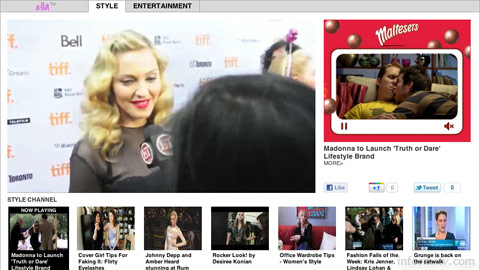 “The video channels offer another element to add to our toolbox to keep readers engaged and on pages longer,” said Carl Barnett, the managing editor of style blog Fashion Gone Rogue. The site has incorporated a player that includes a selection of style and entertainment video features, with associated advertising.

“Earlier this year we acquired Burst Media, which was essentially selling banner style advertising on behalf of thousands of different web sites,” Suranga Chandratillake, the founder and chief executive of blinkx explained to informitv. “What we’ve done is convert this from a traditional network into being organized into a number of channels, and each is a demographically targeted collection that makes sense for a particular community or interest area.”

“The essence of what we’re doing is creating a television like experience, distributed across many different sites but essentially aggregated around different channel concepts,” he continued. “The great thing about this is that we’re creating channels that advertisers can buy ads on in the same way they might have bought on a television channel.”

The company offers a range of advertising units, from contextual display banner to pre-roll video, and the ability to sponsor the video player itself. Each channel has a selection of clips that are apparently updated every day or two with a selection of items, typically clips of around five minutes. Most of the material is acquired on a non-exclusive basis, paid for either on an annual licence fee or on a revenue share basis.

Both Google and blinkx appear to acknowledge that users will not necessarily search for video but also expect it to be editorially selected and programmed.

“When you look at how consumers view video content, one is very search oriented, but then there is a more lean back serendipitous experience,” comments the founder of blinkx, who previously worked at Autonomy. Becoming a public company listed in London in 2007, blinkx now indexes over 35 million hours of video that can be searched online. “Online video is a combination of online and television,” he said. “Sometimes users need things like search, but on the flip side television is more of a programmed experience. Our job is to provide both.”