The trend toward internet-connected television screens is evident at the International Consumer Electronics Show in Las Vegas. The label Smart TV is prevalent, promoted by Intel, Samsung and LG, aiming to reflect the popularity of the term smartphone. The smart television can co-operate with other smart devices, from phones to tablets, and link to digital video recorders, as part of a connected home media experience, ultimately rendering the set-top box obsolete. Samsung showed up with a Google TV product, but significantly also showed it had support from DIRECTV, Comcast and Time Warner Cable.

Samsung, with nearly a fifth of the flat-screen television market in the United States, just ahead of Vizio, announced support for Google TV with a new Blu-ray disc player and a companion box based on the Android platform, offering access to a variety of internet services.

Samsung also showed the first televisions compatible with a remote user interface, in this case allowing DIRECTV customers to watch live and recorded programming from their digital video recorder directly on their network-connected television, without the need for additional set-top boxes. The technology is known as RVU and is based on industry standards such as DLNA and UPnP, enabling devices such as digital video recorders to act as servers for network-connected television displays anywhere in the home.

Comcast cable customers will be able to use the Xfinity TV service on Samsung smart televisions or Galaxy tablet devices. Among the planned features is the ability to begin watching a programme on a network-connected television, pause and resume viewing on a portable tablet, or pause on the tablet and continue on the television display.

Time Warner Cable customers will be able to access cable television programming directly on compatible Samsung smart televisions or on a Galaxy tablet, through a downloadable application. It will allow cable customers to view live television or programming recorded on their digital video recorder on a Samsung Smart TV, again enabling multi-room viewing without requiring multiple set-top boxes. 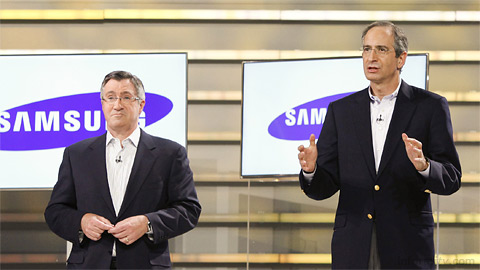 Brian Roberts, the chairman and chief executive of Comcast, and Glenn Britt, his counterpart at Time Warner Cable, joined Boo-Keun Yoon, the head of visual displays at Samsung, in his keynote presentation to demonstrate the capabilities, which will be available later in the year. 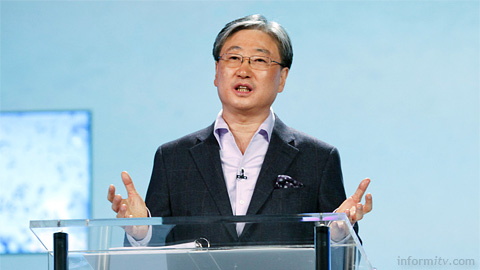 “The evolution of television in recent years has been astounding as consumers seek technology that enhances their viewing experience, and their lives,” said the Samsung executive. “Integrating the traditional television experience with applications and features like 3D bridges the gap between simply consuming programming and interacting with it. We are seeing that consumers are embracing these new experiences with their TVs.”

Samsung announced that it will be the first to integrate support for Adobe AIR 2.5 for TV, allowing developers to create applications in Flash and distribute them through the Samsung Apps store. All 2011 Samsung Smart TVs and Smart Blu-ray players will include support for Adobe AIR for TV. Samsung also plans to bring Adobe Flash Player 10.1 to its Smart TV browser, enabling access to web sites and online video services that use Flash. Samsung is also making available a software development kit for its Smart TVs and Blu-ray players, based on common web technologies, including XML, JavaScript and Adobe Flash.

The winners of the Samsung Free the TV Challenge to develop applications for their Smart TVs were also announced. The four winning applications will be available through the Samsung Apps store in the future. The first-placed winner was WeDraw, an application that allows a player to draw a picture on a smartphone while others guess what it is while viewing on the television screen. The people’s choice winner was Numote, which combined social features to promote and discover programmes.

Also unveiled were new applications from ESPN, MLB and NBA, allowing sports fans to follow their teams on television with interactive features from the comfort of their couch.

In the first half of 2010, Samsung accounted for two-thirds of connected televisions sold in the United States, according to DisplaySearch. In 2011, Samsung expects the market to reach 6.5 million units and anticipates that demand will grow to 20 million units by 2012. Worldwide, DisplaySearch predicts that over 122 million televisions will ship with internet connectivity in 2014, with emerging markets providing a significant proportion of the growth.

LG, with over 10% of the market for flat-screen televisions in the United States, launched its SmartTV range, featuring a Home Dashboard interface and Magic Motion Remote Control.

Also premiering at CES is the ST600 SmartTV Upgrader, a set-top box that brings smart television functions to existing televisions with an HDMI connection. 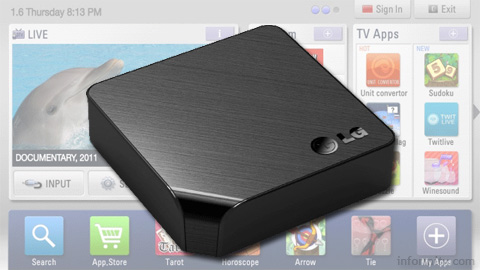 Building upon the NetCast Entertainment Access offering, the LG SmartTV platform includes access to Netflix, YouTube, and Hulu Plus among other services. The LG App Store provides other applications for download. It can be navigated by a remote control with finger touch pad or smart phone with an Android or iPhone keyboard application.

Yahoo! is meanwhile still pursuing the Connected TV platform with which it pioneered the concept of television widget applications. It has announced support for what it calls broadcast interactivity. This is slated to launch with a number of national broadcast and cable channels and selected brand advertisers. Yahoo! is collaborating with ABC, CBS, HSN, and Showtime on content for a pilot program in the first half of 2011.

With broadcast interactivity, television programmers will be able to create applications that let viewers vote for a participant on a programme, get more information about characters, or make purchases while watching a show.

The applications envisaged sound remarkably similar to interactive television propositions that have been discussed for over a decade. They failed to take off in many markets, partly because of the limitations and fragmentation of the technology platforms available at the time. Whether viewers ever actually wanted them is another matter. Now they can be delivered using web technologies and broadband connectivity, but channel, programme and advertiser associated interactivity may be less appealing than ability to access other media over the internet or within the home.

To this end, Yahoo! is showing examples of three-screen interactivity, across mobile phones, tablets and televisions. Demonstrations showcase an Android phone used as a smart remote control for Yahoo! Connected TV, a tablet device used in sync with an on-air program, and the ability to “flick” videos from the tablet or phone to a television screen for shared viewing.

Yahoo! is also demonstrating its Connected TV Store, due to launch in March 2011. Yahoo! will process transactions, and developers can sell their widgets for anything from 99 cents to 99 dollars, receiving 70% of the revenue after taxes and currency exchange fees.

It seems clear that the future of television is connected to the internet, as it evolves into a Smart TV, able to communicate with other devices and displays. One way or another, the living room screen is becoming a more dynamic display, capable of running applications, generally based on web technologies. This new interactive television is being defined not by broadcasters or platform operators, but by consumer electronics manufacturers and computer software companies. However, the participation of pay-television providers is significant, as the killer application for connected television is still premium programming.