Google is apparently testing a television search service with Dish Network. The internet search company really has yet to break into the lucrative television advertising market. The satellite television operator meanwhile may have a more immediate concern in view of its patent problems with TiVo, which has been pioneering its own search and advertising solutions.

The Wall Street Journal cites unnamed sources, describing tests limited to a small number of employees and their families.

It says the service runs on set-top boxes containing Google software and allows users to find shows on the satellite television service as well as web sites like YouTube.

Some have leapt to the conclusion that this means using the Android operating system that Google originally developed for mobile phones.

Google chief executive Eric Schmidt has previously talked about the possibility of using Android as an operating system for set-top boxes and network-connected televisions.

Google has had its eye on television for some time. For the last four years Vincent Dureau has been Head of TV Technology at Google. He was previously the co-founder and chief technology officer of interactive television software company OpenTV.

The search company is well-placed to improve the way people find programming, which is more of a user interface challenge than a technology problem and is unlikely to be solved by users entering keywords on a keyboard.

The real interest for Google may be in applying its advertising model to television. Google announced a partnership with EchoStar back in 2007 to introduce an automated system for buying, selling, delivering and measuring television adverts on their Dish Network.

Google TV Ads offers a self-service auction for television adverts based on its AdWords system, but it has so far failed to attract major brands, so far only dealing with smaller satellite and cable channels. 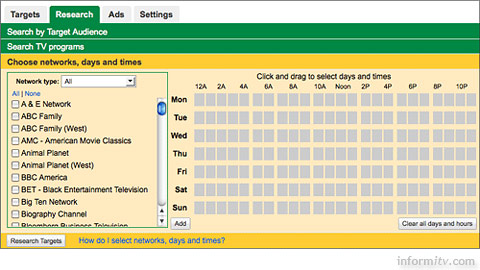 Google has the potential to disrupt existing business models and is seen as a threat by many in traditional media. While the television advertising market is ripe for rationalisation, the media industry has a vested interest in the way airtime is bought and sold, despite its apparent inefficiencies.

Google pulled out of its efforts to sell print and radio advertising last year but is sticking with its television advertising initiative, with the prospect of internet-connected television devices and displays.

The American cable television companies have been characteristically slow to respond. They formed their own consortium, Canoe Ventures to roll out targeted commercials but the project has faltered in the face of technology integration and operational challenges.

Meanwhile TiVo has for some years been innovating around search and advertising. It recently showed a new box, TiVo Premiere, which blends television and internet services. The digital video recorder pioneer continues to lose money and subscribers. Its main revenue may well come from the estimated $300 million in damages it could be awarded from EchoStar for alleged infringement of its “Time-Warp” patent.

That is likely to be a more pressing problem for Dish Network.