YouTube has released a version of its site specifically designed for viewing on a large screen. Called YouTube XL, it runs in a web browser and can even be operated with a remote control. Hulu has meanwhile released a desktop application based on Flash for Windows and Mac personal computers.

The user interface for YouTube XL is a cut down version of the usual web site, designed to offer an interactive television style experience. It will work on a variety of devices that can connect to a television display, such as PS3 and Wii games consoles, and is well suited to the next generation of televisions with integrated browsers and network connections. 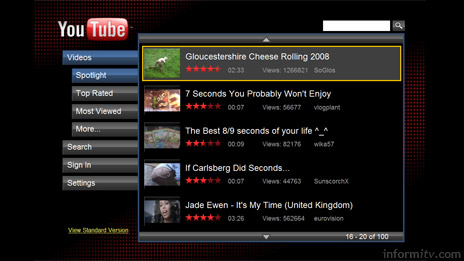 YouTube has been available on other devices for some time, such as Apple TV, but the provision of a generic interface to provide a “ten foot” user experience is an interesting development.

The graphic design is unlikely to win awards, but it is usable either with a mouse or simply by using cursor keys or a suitable remote control. A yellow highlight box indicates the current focus, rather like an early interactive application on cable television.

Hulu has meanwhile released a beta version of a desktop application for Windows or Mac computers, designed to be used with just six buttons on a Windows Media Center or Apple remote control. It also supports a standard mouse and keyboard. 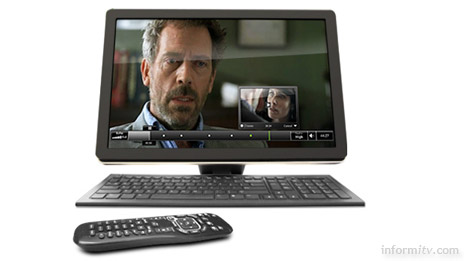 Available through Hulu Labs, the desktop application is slickly designed, based on Flash. Interestingly, the licence agreement does not allow the application to be installed on anything that could be considered a consumer electronics device, as opposed to a personal computer.

Some users have reported that video playback within the desktop application is poorer than from within a standard web browser. Others have suggested that the third party Boxee application was better, before Hulu withdrew access.