CNN served a record 1.3 million concurrent live video streams in the moments leading up to the inaugural address of American President Barack Obama. That may be partly down to using peer-assisted distribution, or not. The consensus was that CBS provided the best quality experience. The BBC was among a number of other broadcaster sites that failed to meet demand for live streams.

The CNN online video audience at its peak nearly doubled the previous internet record of 700,000 concurrent live streams served during a YouTube event. In all, CNN.com served 26.9 million live video streams during the day.

In comparison, the CNN channel reached just under 7 million television viewers in America on the day, of which only 2.8 million were adults aged 25-54. Nevertheless, more Americans tuned to CNN on television during the swearing in and inaugural address than any other cable news network. Most were watching on the major networks.

Nielsen reported that 28.9 million American households, or 37.8 million viewers, watched the inauguration on television, second only to the 41.8 million that watched Ronald Reagan in 1981.

Millions more kept in touch through the web. CNN was the most accessed online news site with 11 million unique visitors in the United States, according to Nielsen estimates, closely followed by MSNBC with 10 million and Yahoo! News with 9 million.

Without doubt it was a big day for online video. “The realization that we broke an all-time internet record is humbling, but couple that with the fact that so many people relied on us to experience the biggest moment in recent history, frankly it’s an honour,” said KC Estenson, the general manager of CNN.com.

Akamai, the content distribution network that serves many sites, including CNN, reported its own record for concurrent live online viewers, reaching 7 million streams, the majority of them live, at 12:15 ET. At that time their network was handling 2TBps.

Octoshape said it breaks through existing limits on online video by keeping traffic local in a network friendly way, thereby avoiding congestion in both the backbone and at the edge.

The Danish company is coy about commenting on the effect of its peer-assisted plug-in on the performance of CNN but confirmed that it was used. It is installed through a request from the Flash media player on the CNN web site. However, it seems that the CNN player also works without the plug-in, so the peering contribution is unclear.

Some visitors to CNN reported being put in a waiting room queue until streaming capacity became available. 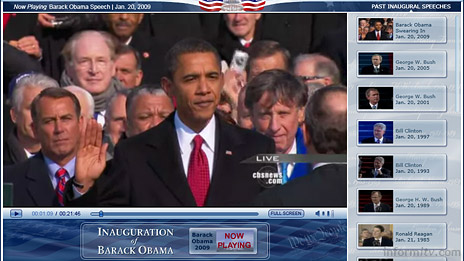 CBS, MSNBC, ABC and Fox all provided feeds. CBS had the best offering according to some online observers, with multiple feeds using streaming technology from Move Networks. Many users reported problems with some sites as they struggled to cope with demand.

A new error in online video
When it came to it, Chief Justice John Roberts fluffed his lines in administering the oath. Barak Obama graciously gave him an opportunity to recover but then repeated one of the words out of sequence. In the end they went through it all again the next day, very slowly, just to be sure.

Some online viewers may have missed the moment. For all the popularity of its iPlayer, the BBC presented many prospective online viewers with a message saying: “This content doesn’t seem to be working. Try again later”. 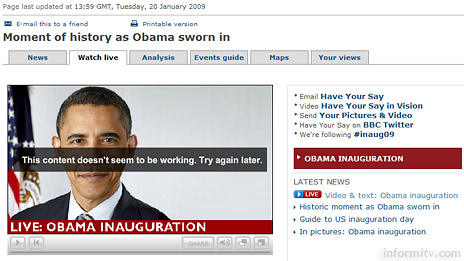 For viewers that wanted to watch a moment of history in the highest quality, broadcast television offered unrivalled coverage. For those in the office, or away from their living room screen, this event marked a new phase in the network television revolution.