The Beijing Olympics is providing a vast choice of coverage through traditional television as well as online and interactive viewing options. The opening ceremony attracted a vast audience, but nowhere near the four billion viewers suggested by some media reports. As many as a billion may have been watching worldwide, most of them in China, but we will never really know.

At one point during the BBC coverage a caption stated that four billion people will be watching worldwide, a figure that was also reported unquestioningly by some newspapers. Audiences of billions are often reported for major events, which upon investigation turn out to have been watched by much lower numbers, but even these are only estimates. 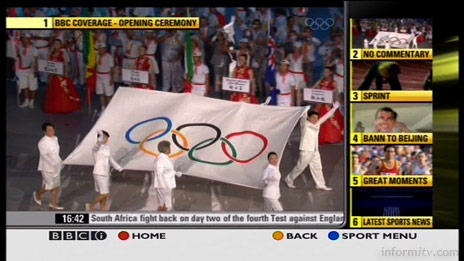 It is possible that four billion people may watch some coverage of the Olympics, but they are certainly not all watching at once.

Estimates by CSM Media Research, a partnership between TNS Group and CTR Market Research in China, suggested that about 842 million of the 1.3 billion people in China watched the spectacular opening ceremony.

Their national peoplemeter panel suggested that over 733 million viewers watched the event, a 60% share of the audience, although this apparently reached 90% at the finale when the Olympic flame was lit.

AGB Nielsen contacted informitv with its figures, based on a panel of 14,000 homes in China with peoplemeters. They show that in China the average viewing audience across the duration of the live opening ceremony was 221 million individuals.

The number of people in China that saw at least one minute of the coverage totalled 376 million across the 4 hours, that is over 60% of the measured population. They indicate that 116 million households or 87% of television homes were watching at some time across the live coverage.

In the United States Nielsen estimated the audience watching the opening ceremony on NBC to be 34 million, the largest television audience for the network since the Superbowl, although the official opening was not shown live. It was aired by NBC 12 hours after it happened in China in order to show it in prime time, drawing criticism from some.

The American audience was not surprisingly lower than that for the Olympics in Atlanta, watched by nearly 40 million Americans, but higher than Athens in 2004 which reached 25 million or Sydney in 2000 which was seen by 18 million.

In the first two days of coverage, NBC attracted a total of 114 million viewers, making it the most watched Olympics ever, topping the Atlanta games.

The opening ceremony drew a peak audience of 7.7 million people in Germany, 5.4 million in Italy, 4.9 million in France, 4.7 million in the United Kingdom, and 4 million in Spain, according to figures collated by Eurodata TV.

In Europe the opening took place during office hours, so the number watching at work may have been higher.

In Australia, where the coverage went on into the early hours of the morning, the audience apparently peaked at 5.9 million, compared to the 7.3 million that watched the opening of the Sydney games eight years ago.

The reality is that we will probably never know exactly how many people were watching, and therein is the considerable challenge for the television industry in general and advertisers in particular.

The NBC Olympics online video offering drew 436,000 unique users on the day of the opening ceremony, nearly doubling to 858,000 unique visitors on the first day of events, according to Nielsen//NetRatings. They said the main NBC Olympics site drew 2.6 million unique users on the opening day, although NBC put the number at 4.2 million. NBC said that it had delivered over 3 million streams in the first two days of the event.

The NBC Olympics online video service is only available within the United States and requires users to have Microsoft Silverlight installed. Users can pick their own coverage from the international broadcast feeds, but there is no commentary, and in most cases coverage is recorded rather than live.

In the United Kingdom, it is reported that around 700,000 people watched the opening ceremony live online through the BBC web site, with a maximum audience of over 100,000 simultaneous streams.

The BBC once again provided unparalleled coverage through its interactive television service, although this year similar multiscreen services were offered by a number of other operators around the world.