Livestation, a global broadcast network that will deliver breaking news over broadband, has won an award for digital innovation in technology in the first ever MediaGuardian Innovation Awards, or MEGAS. Currently in technical trial with broadcasters such as the BBC, Livestation allows users to receive a range of television and radio channels over broadband, anywhere in the world.

Livestation will launch later this year with a range of news channels from leading international broadcasters, bringing them together in a single simple to use player. 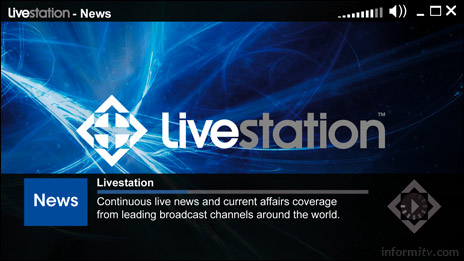 “The judges thought this was a clever and innovative idea: using peer to peer technology whilst reducing broadcasting costs. They were very excited about the possibilities for Livestation’s technology in the future,” said Brent Hoberman, co-founder of lastminute.com, who chaired the panel of judges for the award.

Also among the judges was Ashley Highfield, the director of future media and technology at the BBC. The award was presented by his group controller, Erik Huggers.

Livestation is aimed at anyone that wants to be able to follow live news coverage from leading broadcasters around the world. While the web increasingly provides a primary source of breaking news, there has so far been no single place to access live television and radio coverage from multiple channels. Livestation is specifically designed to deliver live broadcasts to large audiences over broadband, providing a global platform for coverage of news, sport and events.

Since it was first seen at NAB last year as a technology preview, informitv has been working closely with the Livestation team to develop the prototype, platform and the proposition.