Sling Media, creator of the Slingbox, is showing a version of its mobile player software running on BlackBerry smartphones at the Consumer Electronics Show in Las Vegas. The company is also previewing the latest in its line of Slingbox devices, capable of streaming high-definition material.

“SlingPlayer Mobile for BlackBerry has been a top customer request since we launched the original Slingbox Classic in 2005,” said Blake Krikorian, the co-founder and chief executive of Sling Media. “Combining the best of breed email device with the ability to watch and control your living room TV is a killer combo,” he said, describing himself as a Blackberry addict. 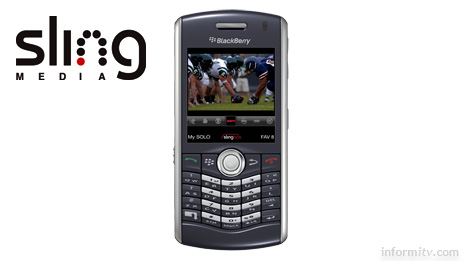 The personalised mobile television experience is enabled by the Slingbox which allows customers to watch their home television or video on an internet-connected PC or Mac as well as a number of mobile phone platforms including Windows Mobile, Palm and Symbian devices.

SlingPlayer will be shown running on a RIM BlackBerry Pearl 8120, which supports both cellular and Wi-Fi data services. Sling Media will release SlingPlayer Mobile for BlackBerry later this year.

Judging by the number of emails we receive sent from a BlackBerry, it could prove to be a popular pairing, enabling all important executives to keep up with their all-important email while watching television on the move.

High-definition
Sling Media is also showing its next generation Slingbox Pro-HD, which is capable of streaming high-definition signals around the home or across the internet.

Sling Media is announcing the latest version of its proprietary streaming technology, SlingStream 2.0. This allows the Slingbox PRO-HD to adaptively stream high quality television content across virtually any network connection.

“Millions of customers are purchasing HDTVs, signing up for HD service and enjoying the benefits of HD quality picture creating a huge market for new products like Slingbox PRO-HD. With Slingbox PRO-HD, our customers will have the ability to placeshift their HD programming without sacrificing the quality of the picture,” said Blake Krikorian.

Sling Media is now a wholly owned subsidiary of EchoStar, which acquired the company for $380 million last September.