Broadband video company Joost has released the 1.0 version of its video player application in preparation for its public launch. It features a redesigned user interface which seems snappier but remains rather unintuitive. Some users also complain that the broadband video platform still suffers from a lack of compelling programming.

Joost will be available to the public without requiring an invitation from Monday 1 October.

There have been a number of improvements to the user interface, but it is clearly still a work in progress. The main channel browser now seems to be much more responsive, although the sequential channel list remains a flawed interface design for navigating an arbitrary number of channels and programmes. 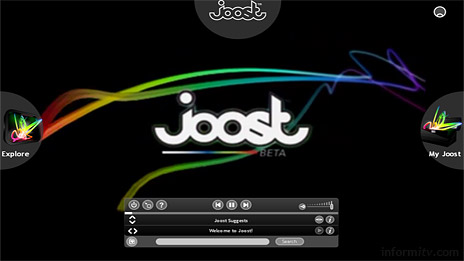 As if compensate, the previous Channel Catalog is now called Explorer, providing a graphical browse view of available channels in thematic categories. These include sections for comedy and drama, with film as a distinct division and rather strangely two separate sections for music and music entertainment. These are represented by some obscure icons, such as a rocket for cartoons and animation and an armchair representing entertainment. 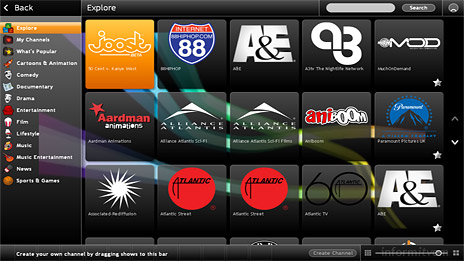 Users can create their own channel by dragging and dropping programme icons to a playlist at the bottom of the screen.

Joost has also added the ability to create a link to a specific programme. Links take the form of a unique identifier appended to the joost.com domain and can be linked on the web, where they resolve to a web page from which the Joost player can be launched with the target item.

It is this kind of deep linking that will allow platforms such as Joost and its rivals such as Babelgum to support an enormous range of programming. It is a feature that some other platforms, such as the BBC iPlayer, would do well to adopt and adapt.

With it comes a web search feature that allows keyword searching from a simple web page. This allows easy navigation outside the Joost player interface.

Simple enhancements, such as a setting to allow the video window to remain always on top of other applications, greatly improve the user experience.

Joost gets many things right, but the overall impression is of a strange hybrid between a programme guide that can easily be navigated using a remote control and a graphic user interface that really requires a mouse. There is a long list of keyboard shortcuts, but for an application that apparently aspires to the ease of use of television, the mixed metaphors remain rather unintuitive.

More significantly, the programming available still seems limited in breadth, depth and ambition, despite the deals that Joost has done with many distributors.

This is an area in which Babelgum is aiming to distinguish itself, with a rather more aspirational approach. If Joost is aiming at the mass market, Babelgum has a more European arthouse feel.

Of course it is early days for both platforms, which are still in an extended beta trial stage. Technically, they are both remarkable achievements, but the proof of the pudding will come in the programming that they can attract.

At the moment, they seem rather sterile. Unlike television, which is constantly appealing to its sense of immediacy through a continuous flow of programming and promotion, these video-on-demand environments are less dynamic. As with many other on-demand systems, there is a sense that the same material will still be there tomorrow, in which case why watch it now?

The product of a computer programming rather than television programming approach, Joost currently fails to provide a completely compelling experience, but it certainly has the potential to do so.