Reuters is using facial recognition to provide real-time indexing and searching of satellite television feeds. The news agency is demonstrating systems supplied by Viewdle, a start-up company that specialises in visual search. The technology is showcased on the Reuters labs web site.

The system looks inside the video stream, frame by frame, to find appearances of previously identified people on screen. It allows users to locate relevant footage and instantly cue to the right point.

“Our goal at Reuters Labs is to proactively identify emerging technologies that add value to our trusted news offerings and keep Reuters at the forefront of the evolution of digital media,” said Nic Fulton, the chief scientist at Reuters. “By implementing facial recognition capabilities throughout our consumer-facing video offerings with Viewdle, we can study the benefits of this search technology with an eye to using it with other Reuters video products.”

The technology appeared to work well when tested by informitv. A search for footballer “David Beckham” found an appearance in an on-screen appeal for Madeleine McCann, also correctly identifying the face of the missing girl in a photo he was holding in the same shot. 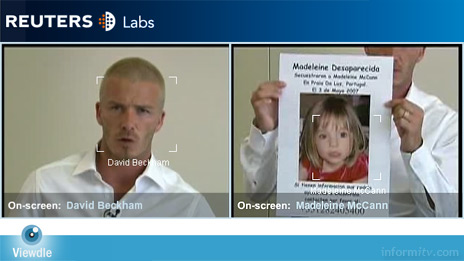 “Viewdle has finally solved the problem of searching within moving media, which is especially applicable for news and entertainment content producers and distributors,” said Yuri Frayman, the chief executive of Viewdle. “This technology will be especially valuable in powering internal indexing for content providers as well as to enhance their audience-facing search and advertising capabilities.”

Based in New York City, with offices in Kiev, Ukraine and London, Viewdle is building the world’s largest people-in-video reference database. The Viewdle engine is capable of simultaneously indexing multiple video streams. Initially focused on providing internal and private-label indexing and search capabilities to news and entertainment media, Viewdle is ecpected to launch targeted advertising solutions, developer tools, as well as a consumer-facing search site.