A British company has developed a telephone-based panel system that can provide real-time viewer feedback for television programmes. Its developers liken it to the original live audience clapometer, allowing viewers to express their views straight to screen. Cleverly, it also uses standard market research weighting to make random voter samples representative of the general population.

Adam Livingstone, the chief executive of Clickvision, told informitv that his company originally approached the BBC back in 2005 with idea of allowing viewers to register their approval or disapproval of political speeches by phoning in and using their telephone keypads.

Adam is a former producer of Newsnight at the BBC. Richard Livingstone, who serves as chief technical officer, previously designed high-volume financial trading systems and is an enthusiast for free open source software platforms to keep down costs.

Initially data was collated and analysed after the event, but more recently the company has been able to display the results directly on screen within two seconds of buttons being pressed. “That’s obviously a lot faster than a red button could do it,” explained Adam, “but it also allows anyone with a phone to take part, not just digital viewers. So it’s perfect for network television.”

Viewers begin by using an interactive menu system to register information such as age and gender, so that votes can be weighted to reflect the composition of the general public. 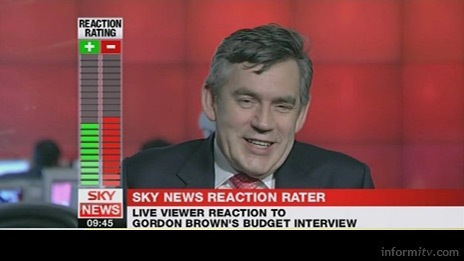 The system has been regularly used by The Daily Politics programme on the BBC.
Presenter Andrew Neil said “It gets more fascinating every week”. Political spin master Alastair Campbell is reported as saying that “It’s trying to turn politics into a reality show,” but a Member of Parliament has described it as a wake-up call for the Westminster village.

With the system it is also possible to provide what Clickvision calls ‘post match analysis’ — replaying the voting synchronised with a video or an audio recording of the original event and even breaking down the results to show the responses of the different demographics. Software is also provided to all web users to replay all previous panels at home 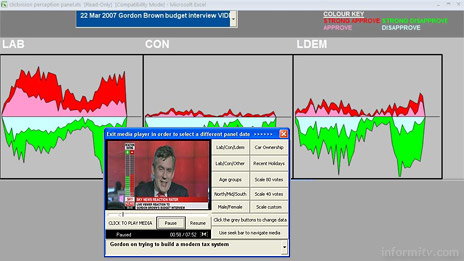 The system currently supports around 1,500 viewers simultaneously, with phone lines provided by Itouch.

“We have been getting requests from game shows and the like to use our product as an audience participation tool rather than for polling, so we needed far more lines,” Adam continued. “So we’re about to expand our service onto a new platform that will have up to 22,000 lines by the end of the year, plus 10,000 lines for internet phone users and, crucially, access to the phone system in the United States.”

Given the recent controversy over the use of premium rate phone lines for television votes and competitions, a panel based system using a large number of viewers to generate almost instant feedback would appear to be of obvious interest to many television producers.

Developed by a journalist for serious editorial use, Clickvision says that producers can use premium rate phone lines, but they encourage low tariff or toll free numbers to ensure that the widest possible sample of viewers will take part, which seems like an admirable attitude.

Clickvision is currently looking to expand into the United States, where it should find significant appeal.