Channel 4 is the first major broadcaster to make the majority of its commissioned output available for download over broadband with its new 4oD service, although it will only be accessible to users in the United Kingdom and the Republic of Ireland.

The online broadband video download service for computers is limited to Windows machines. It requires users to download an application, which currently only supports computers running Microsoft Windows XP, Internet Explorer 5.5 or later, and the latest versions of Windows Media Player.

The web site says that it is not possible to support other computer platforms “because the accepted Digital Rights Management system used to protect online video content, which is required by our content owners, is not compatible”. 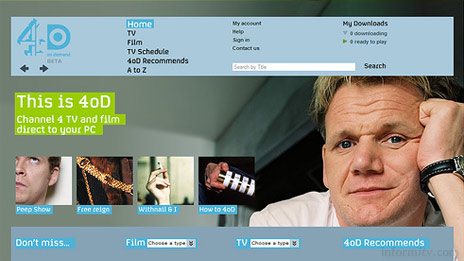 Cable television customers will have access to 4oD programmes on demand, where the service is available. Programmes will also be available on the recently launched BT Vision broadband video-on-demand service.

With the download application installed, computer users can download programmes up to 28 days after transmission or pre-book programmes for up to two weeks in advance.

The interface is slickly designed and easy to use, allowing browsing by television programmes, films, recommendations or alphabetically.

The “near-DVD quality” videos are encoded at around 1Mbps. It will typically take around twice the length of the programme to download, depending on connection speed.

The service uses the Kontiki video distribution software which is also used by BSkyB and was originally used for a BBC trial of a similar download service which has yet to launch.

The system uses peer-to-peer distribution, but Channel 4 provides little information on the implications of this. The licence terms stipulate that during the licence period the company may upload content from the computer of the user for the purpose of transferring it to other users of the service.

Programmes can be viewed multiple times within a 48 hour period up to a month after they have been downloaded. Selected programmes are available for purchase for viewing at any time.

The programmes can only be viewed on the computer on which they were originally downloaded. Users will not be entitled to a further copy in the event that the video or its associated licence is lost, damaged or deleted.

Channel 4 programmes are already broadcast unencrypted in higher quality. Anyone with a suitable digital video recorder, or even a Microsoft Windows Media Center, is already able to record and store its programmes indefinitely for their personal use.

Unlike BSkyB, which offers movies and other programmes over broadband as an added-value bonus to its subscribers, or the proposed service from the publicly funded BBC which will be free, Channel 4 is offering a commercial model.

The price point of a couple of dollars an episode has been established with some success on Apple iTunes. For anyone that has missed a favourite show it could still be a bargain. Otherwise the value proposition of paying a pound a programme is unproven.

Initially the programmes will be without advertising, but the channel is considering advertiser supported programming in the future, as well as a subscription service.

Channel 4 is leading the way, but within six months, the major terrestrial television channels in the United Kingdom could all have separate programme download services.

BT has launched a broadband video service that will provide access to a range of ‘catch-up’ services on a pay-per-view or subscription basis. These will be available as video-on-demand streams for immediate viewing.

Andy Duncan, the chief executive of Channel 4, has predicted that within five years up to half of all viewing could be time-shifted.