A new web site is about to launch which aims to become a leading gateway to television shows online. TIOTI is short for Tape It Off The Internet and makes it easy to find, share and discover television shows, presenting links to entire seasons of full episodes of hit shows and classic series for download. It could be the next YouTube.

TIOTI aggregates programming within a social network, indexing available shows from various services and consolidating them in a single community driven site, complete with ratings and recommendations. 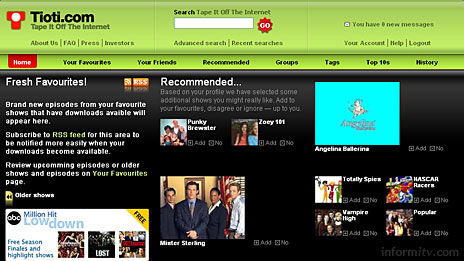 The very professional looking site is the result of collaboration between Paul Cleghorn, a web designer in London, and Marc Colando, based in Seattle. It has apparently been put together with very little budget, using a team of developers in the Ukraine.

Paul came up with the idea as a result of his frustration in waiting for the final series of The West Wing to be screened in the UK. He turned to the internet to download episodes but found it difficult to keep track of where they could be found.

“Surely there is an easier way,” he told informitv. “I would happily have paid to watch these programmes but a year ago the only way was to download illegal copies.”

The TIOTI web site provides links to legitimate sources, such as Amazon, but most of its links currently lead to other sites pointing to BitTorrent files that are generally illicit off-air copies.

Paul does not see any immediate legal issues with this. “We are one step removed,” he said. “In that sense we are no different from any other search and link site. We think we’re going to be OK.”

The site, based in the United States, does recognise the Digital Millennium Copyright Act and provides a takedown mechanism to enable copyright holders to request the removal of infringing material.

Attitudes towards rights may be changing. “We understand now that piracy is a business model,” said Anne Sweeney, the president of Walt Disney ABC Television at a recent industry conference. “It exists to serve a need in the market for consumers who want TV content on demand. Pirates compete the same way we do — through quality, price and availability. We don’t like the model but we realize it’s competitive enough to make it a major competitor going forward.”

Unlike the music industry, which was late to understand the threat and opportunity, the television and movie worlds may be more ready to embrace online downloads, providing they can offer legitimate alternatives to piracy. Warner Brothers announced earlier this year that it would use BitTorrent as a method of distributing legal downloads.

The internet offers the potential for global distribution, whether illicit or legitimate, which undermines the traditional territorial approach to buying and selling programmes. Channel 4 in the UK reportedly paid £40 million to show the next two series of Desperate Housewives, making it the most expensive acquisition of US show by a UK broadcaster.

A search of TIOTI shows that the first two seasons are available on DVD from Amazon, and the first episodes of season three can already be found on the net. 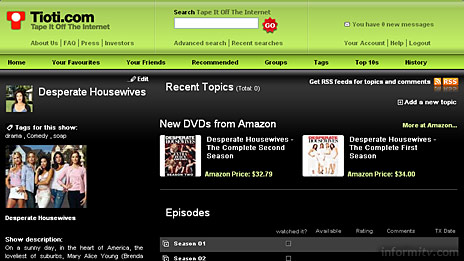 With many networks and channels planning to offer their own standalone download services, the problem for the consumer will be how to discover and access all the programming that will ultimately be made available. That is the opportunity seen by sites like TIOTI and their timing could be spot on.

“The marketplace for online television is going to get dramatically more segregated in the near-term as everyone from studios to AOL, to Apple to Amazon, as well as the individual TV networks, offer their slices of the media content universe,” observed Paul. “TIOTI has an immediate opportunity to become a trusted one-stop source for TV in this environment because of our country-, network- and source-agnostic approach to aggregating content within a social experience.”

Paul says their proposition is different to YouTube. “I am not very interested in user generated content,” he said. “To me that’s not TV. Our ambition is to offer all the television in the world — to be the long tail.”

The initial business model is premised on advertising and they say they are open to offers of potential partnerships or investment opportunities.

The site itself is slickly designed and packed with web 2.0 technologies and approaches, putting many commercial portals to shame. It is currently being used by an invited group of beta testers, with a view to launching to the public in the coming weeks.