The software, seen at the IBC trade show in Amsterdam, was first used to produce and deliver an interactive application for Major League Baseball in the United States. This allowed viewers to select from up to six live games shown simultaneously on screen. 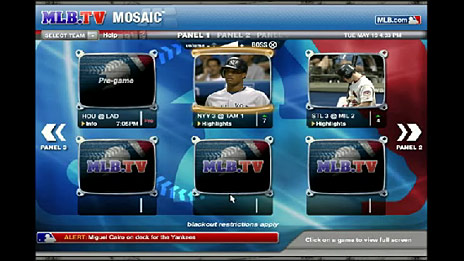 The Ensequence system is said to be the first to enable seamless portability between interactive television and broadband computer based environments.

A number of projects have previously targeted web browsers or media centre computers for this purpose, but the Ensequence authoring tools now enable an application developed for a set-top box to be ported to a Windows or Macintosh platform.

Using the Ensequence on-Q tools it has always been possible to preview an interactive television application on a Windows computer. Now a distributable player with the broadband edition of the software suite allows applications to be deployed to Windows XP and Macintosh OS X systems.

Naturally this still requires integration of back-end systems to deliver associated audio, video and data over broadband, but it could considerably extend the potential audience for interactive television applications.