The BBC is rolling out its iMP integrated Media Player to 5,000 users in a trial of the broadband download service, allowing access to selected radio and television programmes transmitted in the previous week. Among those testing the new service, informitv offers an exclusive review.

The iMP is a personal computer application that aims to offer up to 300 hours of BBC radio and television programmes a week, initially in Microsoft Windows Media format using their digital rights management system. The programmes are downloaded in the background over a broadband connection and can be viewed for up to a week after first transmission. 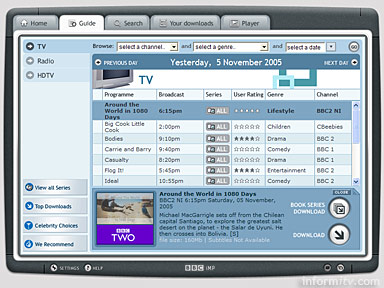 The selection of programmes is limited to those for which the BBC has negotiated the relevant rights. It includes a small number of programmes in high-definition format. The service is only available within the UK, based on identification of the internet address.

A peer-to-peer distribution system from Kontiki is used to spread the download to allow distribution to an arbitrary number of clients.

On a reasonably fast broadband connection, a 30-minute standard definition television programme can be downloaded in around half an hour, and the quality is quite acceptable. Programmes can also be transferred to compatible portable devices.

The iMP is being made available as a limited trial to evaluate user feedback and it still has a few wrinkles which will no doubt be ironed out. The trial will be used to assess the demand for particular types of programmes and the public value that it offers, as well as the impact on the commercial market. Approval to launch a full service will be required from the BBC governors.

Satellite broadcaster BSkyB is planning to use a similar system to offer its own broadband sport and movies service, scheduled for launch later this year.