A research report reveals that over half the potential users of interactive advertising in the UK are not engaging with interactive TV because there are either too few incentives or they are still daunted by the prospect.

The study shows that those ignoring interactive adverts are also disregarding other interactive services on the Sky platform.

The research was based on a telephone survey of 300 viewers who had not interacted with an interactive advertisement in the last year and were unlikely to interact in the next six months. A group of 100 viewers that had interacted and were likely to do so again were also interviewed. 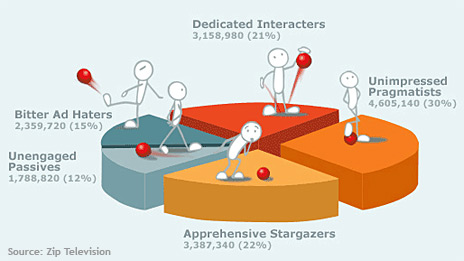 The ‘dedicated interacters’ make up around a fifth of the available audience, around 3.1 million. However, the ‘unimpressed pragmatists’ feel there is not enough incentive to interact, while the ‘apprehensive stargazers’ are too daunted by the prospect, believe that it will costs them money and takes too much time. Together these groups represent the biggest opportunity to grow the number of interactors, the study suggests.

While interacters see interactivity as enhancing the TV experience, non-interacters have low expectations of interactive television, having never really engaged or learnt about the medium.

One interviewee said “I’ve survived without pressing red for this long, why start now?” Another said “You get so used to seeing the red button, that I forget it’s there.”

“As broadcasters, we must make it as easy as possible for viewers to press the red button,” said Mark Connolly, head of interactivity at sales house IDS. “Familiarity with interactive services is paramount to driving usage. If a viewer interacts once they are more likely to press red again because the element of doubt has been lifted. It will bring a new audience to interactive advertising and boost potential earnings of commercial TV.”

Emma Somerville, head of interactive programming at the BBC, believes that broadcasters must take a lead in educating potential users. “The BBC has a major role to play in educating audiences and the industry as to the benefits of interactive TV,” she said. “We are also aware that there are still audiences who are not willing to interact – understanding why they do not want to join in is the first step in broadening our reach further.”

Passive2Active: Extending the Reach of Interactivity on TV is published by Zip Television.